Start a Wiki
watch 01:51
The Loop (TV)
Do you like this video?
Kimberly Whiting, aka Kimberly Bianco (Johannah Newmarch), is the main villainess from the 2015 TV film, Murder, She Baked:  A Plum Pudding Mystery, the second film of Hallmark Movie Channel's Murder, She Baked series (airdate November 23, 2015).

Kimberly Bianco is the daughter of Salvador Bianco, the owner of the Bianco Media Center in Green Bay, Wisconsin. Before the events of the film, Kimberly was in a relationship with Larry Jaeger, and it led to Larry becoming Salvador's business partner. However, Larry was a con artist, and he intentionally bankrupted Salvador's company, forcing the Media Center to go out of business. Kimberly wanted revenge on Larry, and her father's passing in January 2015 only fueled her desire.

Kimberly moved from Green Bay to Eden Lake, Minnesota under the name Kimberly Whiting; working as a business teacher in a class that had Delores Swensen (mother of main protagonist Hannah Swensen) as a pupil. She had found Larry at the same town, as he had become the co-owner of the Crazy Elf Christmas tree lot, with his fiancee, Courtney Miller. Kimberly learned about Larry continuing his cons from Luanne Granger, an accountant hired by Courtney due to her own suspicions, and following this, Kimberly went into Larry's home and shot him to death. The vengeful villainess fired three shots at Larry, and after the murder, Larry's estranged wife, Nancy Schmidt (aka radio host Dr. Love) became a top suspect.

Kimberly encountered Hannah and Delores twice, and it was in the second encounter that she asked about Nancy's arrest. However, Hannah began to figure out Kimberly's role and her true identity when she realized that "Bianco" is Italian for "white," and she left a baking auction to search the Bianco name on her phone. Kimberly witnessed Hannah leaving, and figuring that her role would be revealed, she followed her and caught Hannah photographing her license place. It was at that moment that Kimberly pointed a gun at Hannah, confirming her reveal, and she voiced her hatred of Jaeger--blaming him for her father's death. After being distracted by a Santa Claus display, Hannah knocked down Kimberly, who later fired shots at Hannah and chased her all the way to the tree lot.

Once there, the evil Kimberly revealed her relationship with Larry, accusing him of using her (unaware that Hannah had already called Mike Kingston and he heard the shots being fired). She also boldly admitted to killing Larry, and had plans on killing Hannah before a distraction by police sirens allowed Hannah to retrieve the gun from Kimberly's possession. Mike and the rest of police later captured and arrested Kimberly. 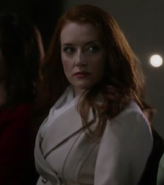 Kimberly threatening to kill Hannah Swensen
Add a photo to this gallery
Retrieved from "https://femalevillains.fandom.com/wiki/Kimberly_Whiting_(Murder,_She_Baked)?oldid=170122"
Community content is available under CC-BY-SA unless otherwise noted.