Kelly is the partner and best friend of FBI agent Linda Crow. Linda eventually finds herself captured by mafia boss Don Giordano, and is subsequently tortured and sexually violated by him, his wife, and various members of his organization. Throughout it all, however, the agent remains confident that her partner will rescue her and justice will be served.

Eventually, Kelly finally does arrive, knocking out one of the goons and telling her partner that she always knew that she was still alive (despite the Mafia having faked Linda's death) while assuring her that these bastards will pay for what they did to her. Unfortunately, however, not but a moment later, Kelly turned heel and revealed that she was only kidding, and punches Linda in the face. She then goes on to say that she has not only become the chief of police in Linda's absence, but has also allied herself with Giordano. The story ends with Kelly joining the "fun" session with the rest of the gang.

At some point after the first story Linda is rescued from her hell, and six months on from her rescue Kelly and all of those who took part in Linda's ordeal have been arrested. But as soon as she returns to the field Linda is taken again, this time by Don Giordano's brother. She is tortured by the brother and the jailed Don is able to watch it all from prison due to his friendly relationships with the guards.

Kelly is released on bail and turns up to the house where Linda is being held, she proceeds to torture a bound Linda, beating her and sexually violating her. After she's satisfied by the torture session Kelly poses Linda in a horribly uncomfortable position involving heavy weights. She then leaves the room as Linda desperately begs Kelly not to leave her in this position. She isn't seen again after this.

Kelly, in her days before the betrayal

Revealing her true colors to Linda... 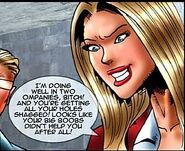 Kelly's sinister smile
Add a photo to this gallery
Retrieved from "https://femalevillains.fandom.com/wiki/Kelly_Harper_(Last_Mission)?oldid=72883"
Community content is available under CC-BY-SA unless otherwise noted.