Kazumi Takenaka was a minor villainess from "Kogoro's Date Murder Case" episode 4.13 of Case Closed (airdate March 16, 1998). She was a middle school teacher and the roommate of Sachiko Shimamura, an import sales director. The episode began with Sachiko returning from an impromptu date with detective Kogoro Mouri to find Kazumi stabbed to death in the dining room.

While it was initially believed that Kazumi was murdered by a burglar, Kogoro (with help from Conan Edogawa) was able to deduce that Sachiko was the true killer and had used Kogoro to help establish an alibi to get away with her crime. After being cornered with the evidence against her, Sachiko confessed and revealed Kazumi's villainous secret: she had been blackmailing her.

Sachiko went on to reveal that Kazumi had learned about how she'd begun selling illegal imports and demanded her to pay her off on a monthly basis, threatening to turn her into the police if her demands weren't met. Eventually, Sachiko had enough and killed Kazumi by breaking into their apartment posing as an intruder, making noise in the dining room to wake up Kazumi before stabbing her greedy roommate to death. 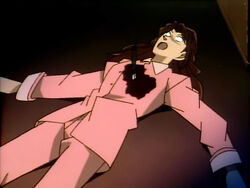 Kazumi's deceased body
Add a photo to this gallery
Retrieved from "https://femalevillains.fandom.com/wiki/Kazumi_Takenaka_(Case_Closed)?oldid=161734"
Community content is available under CC-BY-SA unless otherwise noted.