Kay Ludlow (Shelley Long) is the main villainess from "Write, She Murdered," episode 6.07 of Diagnosis Murder (airdate November 5, 1998). She is a noted murder novelist who is shown pitching her latest Danielle Slade novel to her agent, Jim Rothman, who demands the rest of the manuscript. Kay stated that she has writers' block and hasn't come up with the rest of the book, angering Rothman to the point where he demands his 10% cut and orders her to find inspiration, even jokingly suggesting that she kill someone and watch how the investigation goes. In response, Kay turned heel and stabbed Rothman to death with a letter opener, and even thanked Rothman for the suggestion.

After killing Rothman, Kay began her plan to ward suspicion off herself, first by dialing her own phone and playing a recording of Rothman's voice to Mark Sloan. It was after the deception that Rothman's body was found, with a scorpion left at the scene. While Mark and company are searching for the killer, newly inspired murderess Kay composes her novel, using the scene to do so, all the while actually conversing with her lead character, Danielle Slade. Kay's plans hit a snag when another author, Sid Abernathy, was murdered in the same fashion as Rothman, but after Archie Mullen was revealed as Sid's killer, the conclusion was that he killed both Sid and Rothman and set up Kay for both murders, leaving Kay in the catbird seat, for the moment.

While Kay was writing her novel, however, Bruce Blazer (a former TV star turned author) phoned Kay with proof that she was responsible for killing Rothman. With that, Kay entered Bruce's home looking to silence him, only to find him dead already. However, the set scene is quickly revealed to be a ruse. Mark Sloan appeared, having correctly fingered Kay as Rothman's killer. With Mark's help, Kay noticed that the one thing out of place was the fact that there were no coasters. Kay used a coaster when she was in Rothman's office committing the murder but there were no coasters when Sid was murdered. Kay was arrested by Steve Sloan, and when Mark asked for a motive, Kay simply said she had writers' block. The last scene shows Kay in her cell finishing her novel, while also planning a novel about a prison break. 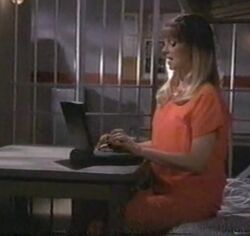 Kay in prison writing her novel
Add a photo to this gallery
Retrieved from "https://femalevillains.fandom.com/wiki/Kay_Ludlow_(Diagnosis_Murder)?oldid=213150"
Community content is available under CC-BY-SA unless otherwise noted.