Katherine "Kay" Freestone (Trish Van Devere) is the main villainess from "Make Me a Perfect Murder," episode 7.03 of Columbo (airdate February 25, 1978). She is an Emmy winning TV executive and programmer for CNC, and she was also engaged in a romantic relationship with her boss, Mark McAndrews.

Mark was later promoted to a high-level position that would take him from Los Angeles to New York, which Kay is informed about after their latest tryst. However, Mark also informed Kay that she would not be promoted to replace him in his former position, which upset Kay. She was given a new Mercedes as a consolation gift, and after noticing her anger, Mark gave her his gun and jokingly invited Kay to shoot him. Kay took a look at the gun and decided to seriously take up his offer, devising a murderous plan that included--among other things--timing.

During the screening of a made for TV movie, The Professional, Kay fiddled with the projector's timer to fool projectionist Walter Mearhead, who she later sends on an errand. After he leaves, Kay went to Mark's office, while placing a glove on her right hand, and later shot her lover to death. With her recorded tape reminding her of the time remaining to commit the murder and return in time, the evil Kay hid the gun in an elevator ceiling and returned to the projection room in time and changed the reel.

As a result of the murder, Kay was promoted to Mark's position, and during Columbo's investigation, he brought that up to Kay as a possible motive. Columbo asked Kay if she would have been promoted had Mark been alive, to which she said she wouldn't and it wasn't mentioned. During another meeting with Columbo in an elevator, the villainess saw the gun in the ceiling when it lit up, and after she was alone, she managed to retrieve the gun. However, it was revealed by Columbo that police had already spotted the gun and moved it to a visible position, where they watched her remove it. Columbo also uncovered Kay's exact actions during her murderous scheme, which included switching the reels. Kay later confessed to the murder, and was arrested by Columbo. 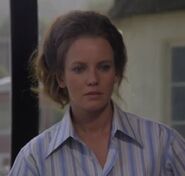 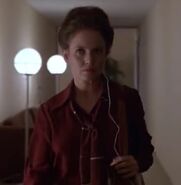 Retrieved from "https://femalevillains.fandom.com/wiki/Kay_Freestone_(Columbo)?oldid=141513"
Community content is available under CC-BY-SA unless otherwise noted.