Start a Wiki
watch 01:48
The Loop (TV)
Do you like this video?
Katie Sanders (Vanessa Walsh) is the main villainess from the 2019 Lifetime film, Best Friend's Betrayal (alternately titled, Besties; airdate January 13, 2019).

Katie's backstory revealed a trend of psychotic behavior going as far back as middle school. During that period, Katie befriended Michelle, and their friendship was close until Michelle met and fell in love with Kevin Lewis. Katie's jealousy caused her to see Kevin as an obstacle in their friendship, leading to Katie shoving Kevin down a flight of stairs. Kevin survived Katie's attack, and he went on to marry Michelle years later.

Katie was institutionalized by her parents after the incident, but in the film's events, she was friends with event planner Jessica "Jess" Baker, as they bonded together over their bad marriages. In Katie's case, she named Kevin as her ex-husband and claimed that the marriage ended when he cheated on her with an unknown redhead. Jess later met mystery writer Nick Moore, and upon learning about the relationship, Katie acted happy for her friend's romantic success, but in actuality, her jealousy resurfaced and she saw Nick as an obstacle. Her first act was tossing a brick through Jess' window, but later on, Katie appeared at the house and saved Jess and Nick from the former's ex-husband, Marco, doing so by spraying him with mace.

Katie and Jess spent a bit more time together afterwards, but the former began planning to sabotage Nick's good name, beginning with killing Marco by pushing him down the stairs, getting the idea from one of Nick's novels. After Jess learned about her ex-husband's death, Nick informed Jess that she shouldn't be mournful over someone like Marco, which played into Katie's plan. The deranged villainess attempted to manipulate Jess into believing that Nick was Marco's killer, using his novel and his sentiment about Marco to back up her claim, which she also made to police. When that fails, Katie set herself up as a hit and run victim--dodging an oncoming car but tossing herself over a wall to injure herself.

Katie's villainous deception works, and Jess ends things with Nick and spends time with her best friend. However, after seeing Jess and her employee, Anna, partying together, and actually kissing each other, the evil Katie killed Anna by strangling her to death, doing so in extreme jealousy.

Nick had suspected that Katie was behind everything, and he contacted Kevin for more information on his ex-wife, only for Kevin to reveal that he was never married to Katie and that his actual wife was Michelle, who revealed Katie's psychotic history. Meanwhile, Katie confronted Jess regarding kissing Anna, and compared her to Kevin, stating that they were both cheaters carrying on with a "blonde bimbo." Jess corrected Katie by saying that Kevin's other woman was a redhead, leading Jess to suspect that Katie was being deceptive.

It was at that moment that Katie revealed everything: her hatred of Nick being in Jess' life, and that she tossed the brick through her window and later killed Marco and Anna. The evil madwoman claimed that her actions were done for Jess, and she was inspired by Nick's writing to see her "potential," while giving Jess a choice: either become her friend or her enemy. Jess responded by knocking out Katie with a tea kettle, and after Nick arrived, Katie went after him with a knife, only for Jess to subdue her deranged former friend with mace. Afterwards, Katie was shown handcuffed and arrested for the two murders, and her attempt to kill Nick. 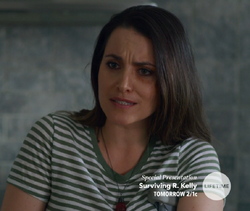 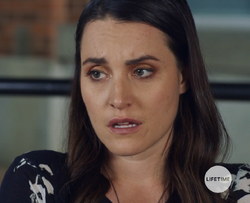 Katie Sanders' arrest
Add a photo to this gallery
Retrieved from "https://femalevillains.fandom.com/wiki/Katie_Sanders_(Best_Friend%27s_Betrayal)?oldid=167641"
Community content is available under CC-BY-SA unless otherwise noted.