Start a Wiki
watch 01:51
The Loop (TV)
Do you like this video?
Katarina is a professional wrestler and manager currently competing as a villainess in Impact Wrestling, where she previously acted as a villainess under the name Winter. She also competed as the villainous Katie Lea in WWE.

Katie Lea debuted in 2008 as the younger sister of Paul Burchill, with the two siblings seeming to be much closer than a brother and sister should be. On her first apperance the sadistic Katie Lea stated that she takes pleasure in watching her brother inflict pain on others, and has done all her life. Burchill replied that he does it to make Katie Lea happy, and anything she wants, she gets. The incestuous overtones to the two characters stopped though when WWE went PG. Katie Lea immediately began feuding with Mickie James, mainly due to Katie Lea accusing Mickie of sleeping with John Cena to get ahead. Katie Lea received a shot a Mickie's WWE Women's Championship at Night of Champions, but she was on the losing end. Both Katie Lea and Paul Burchill were moved to ECW in 2009, where they feuded with The Hurricane, DJ Gabriel and Alicia Fox, and even combated against ECW's General Manager, Tiffany. By 2010, Katie Lea was moved back to the Raw roster, and she was released months later.

Katie Lea joined TNA as Winter in October 2010 and at first, she was portrayed as a supernatural being who only appeared to Angelina Love, but that came to an end when she saved Angelina from a backstage brawl. Winter appeared to be jealous of Angelina's friendship with Velvet Sky, so she was slowly attempting to drive a wedge between the two, beginning with replacing an injured Velvet as Angelina's partner and capturing the Knockouts Tag Team Championship. After she and Angelina lost the titles at Victory Road due to Velvet's inadvertent interference, Winter used that to slowly turn Angelina against Velvet.

While Velvet was being attacked by Sarita and Rosita, Winter prevented Angelina from helping Velvet, seemingly having complete control of her. Winter's evil spell led to Angelina becoming a villainess herself and attacking Velvet during their tag title match against Sarita and Rosita in April. It was later revealed that Winter had been giving Angelina spiked drinks which caused her to become dazed and trance-like, with Winter referring to Angelina as her "demon." Both Winter and Angelina feuded with Velvet for weeks before Winter had her sights set on the Knockouts Championship. Even though Angelina was no longer in her drugged up state, she still acted as Winter's evil partner-in-crime.

At Hard Justice, the evil Winter defeated Mickie James to capture her first Knockouts Championship, doing so with Angelina's help. Winter lost the title to Mickie on the September 1 edition of Impact, but she regained the title 10 days later at No Surrender. Winter's second title reign ended at Bound For Glory when she lost to Velvet Sky in a four-way match that included Madison Rayne and Mickie James. Throughout 2012, Winter and Angelina continuously feuded with Eric Young and ODB until she was released from TNA in September of that year.

Katie Lea returned to the renamed Impact Wrestling under the name Katarina on the May 10, 2018 edition of the program, doing so as Grado's girlfriend. Weeks later, Grado's best friend, Joe Hendry made his Impact debut, and Katarina began managing both of them during their matches--either as individuals or as a tag team.

On the September 6 episode of Impact, Katarina was at ringside as Grado and Hendry were defeated by the Desi Hit Squad. Katarina turned heel after the match by blaming the loss on Grado, calling him a loser. She later dumped Grado and revealed that she was in love with Hendry, after which she kissed Hendry. However, Hendry turned down Katarina's advances and stated that he valued his friendship with Grado, while referring to Katarina as the true embarrassment to the trio. In response, the evil Katarina slapped Hendry and left in a fuming huff. 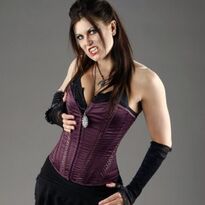 Katie Lea dressed as a vampire 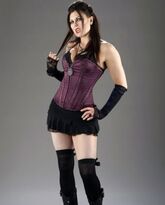 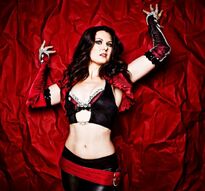 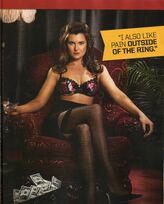 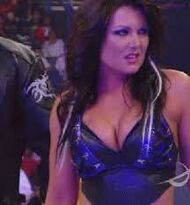 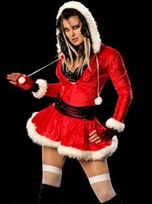 Retrieved from "https://femalevillains.fandom.com/wiki/Katie_Lea_Burchill_(WWE)?oldid=198359"
Community content is available under CC-BY-SA unless otherwise noted.