Start a Wiki
watch 01:51
The Loop (TV)
Do you like this video?
Kathy Jarrow (Brenda Strong) is the main villainess from "Betrayed," episode 7.13 of Law & Order:  Criminal Intent (airdate June 13, 2008). She is a former NYPD officer who currently worked as a true crime author.

Kathy was introduced as the wife of Woody Sage, who was much younger than her, though her backstory revealed that she was married twice before. She and her first husband filed for divorce, and she later married Judge Feld. By that point, Kathy wanted to become a mother, but after learning that Feld was having affairs with male prostitutes, she went into a murderous rage and killed her second husband. Kathy poisoned Feld's drink with a form of viagra, which led to Feld fatally succumbing during one of his extramarital trysts.

After killing Feld, the evil Kathy used her longtime friend, Danny Ross (then a fellow officer), to cover up the circumstances of Feld's death, while also preventing an autopsy from being done. Kathy later married 23-year-old Woody, who was really a con artist named Scott Woodley, and she planned on having a baby with him. She later began to notice that Woody began distancing himself from her, and at one point, Woody recommended Kathy to a masseuse named Avery Hubert. During this point, Kathy learned that Woody and Avery were illicit lovers, leading to her planning to kill the both of them. The villainess hacked into Woody's GPS and tracked the couple to their location, where Kathy took them near a body of water and shot both of them in the head.

Kathy portrayed the role of a concerned wife upon learning about her missing husband, and after the affair was revealed, suspicion fell on Avery's husband, Roy, due to his narcissism and history of domestic abuse. Not only does she continue her manipulation of now-Captain Ross, but she took more tracks to cover up her role as a murderess, including sending a message with Avery's phone and making it appear that they were both alive but had eloped. She also claimed that Woody had contacted her two days prior, after she was shown preparing her nursery, still acting as if Woody were alive to keep up appearances.

Detectives Alexandra Eames and Robert Goren became suspicious of Kathy, leading them to dig into the death of Feld. After the true details of Feld's death were revealed, the episode's climax saw Goren, Eames, and Ross take Kathy to the last location of Woody and Avery, where Goren and Eames revealed Kathy's entire scheme. Kathy denied everything and even attempted to coerce Ross that she was being unfairly profiled, but it was Kathy's comment about Ross getting back at her for turning him down that Ross realized that Kathy was a narcissist and that she was also a serial killer. The villainess also stated that the detectives had no proof, only for Eames to state that they had a body, with Kathy expressing shock when she was told the body they had was Feld's. Kathy finally showed her true colors and confessed to the murders, claiming that her victims deserved their fate, after which she was handcuffed and arrested. 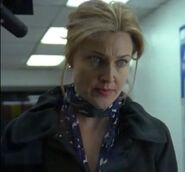 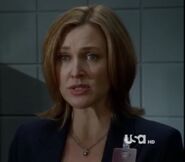 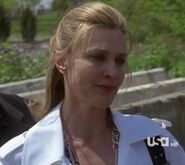 Add a photo to this gallery
Retrieved from "https://femalevillains.fandom.com/wiki/Kathy_Jarrow_(Law_%26_Order:_Criminal_Intent)?oldid=169558"
Community content is available under CC-BY-SA unless otherwise noted.