Kathleen Wolverton (Claire Rankin) is the main villainess from "Trapped in Paradise," episode 6.12 of Diagnosis Murder (airdate January 7, 1999). She is the wife of Frank Wolverton, who was one of the witnesses testifying against the Bickerstaff crime family.

The couple ended up going into witness protection, moving from Miami to a gated community. However, Kathleen was unhappy in her new surroundings, and her attempt to redecorate the house and make it look like home was unsuccessful. When she heard that the Bickerstaffs offered a monetary deal for the witnesses, Kathleen jumped at the chance and began killing the others, beginning with Paul Foster, who she shot and killed in the beginning of the episode. Later on, the evil Kathleen murdered Charles Harris while he was fixing a light bulb, doing so by knocking over his ladder, which caused him to fall and break his neck.

Kathleen's intense decorating knowledge gave her away as the killer, and during the reveal, it was uncovered that she had planned on killing her own husband as well. The villainess denied everything at first, but later gave a bold and callous confession, which included Kathleen stating to Frank that she stopped loving him once they moved into witness protection. She also defended her greedy actions by stating that she was willing to kill Frank to return to what she called "the right house" in Miami, and following this, Kathleen was handcuffed and arrested. 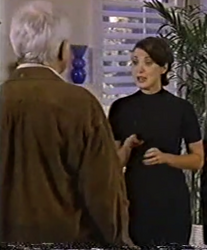 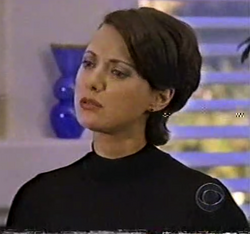 Add a photo to this gallery
Retrieved from "https://femalevillains.fandom.com/wiki/Kathleen_Wolverton_(Diagnosis_Murder)?oldid=134740"
Community content is available under CC-BY-SA unless otherwise noted.