Start a Wiki
watch 01:24
The Loop (TV)
Do you like this video?
Kathleen Strickland (Allison McAtee) was the main villainess from the 2016 Lifetime film, The Wrong House (airdate December 26, 2016).

Kathleen Strickland was a personal trainer who had been secretly targeting the Lassiters (Rebecca, Brian, and their young daughter Maddy) who had moved into the suburbs. The Lassiters bought a suburban house that Kathleen actually grew up in, and she had been attempting to get the house back--feeling that her mother was wrongly evicted from the home. The eviction drove Kathleen into a deep depression; so much so that she had been in therapy--making regular visits to her therapist, Dr. Elizabeth Ross.

After being outbid by the Lassiters, Kathleen made various attempts to get them out of what she felt was "her" house. It began with a few harmless pranks:  having pizzas delivered to the home (using Ms. Lanier's phone to make the order), and planting a dead rat in the house, which resulted in exterminators being called. Kathleen's schemes became more sinister when she tossed a rock through Maddy's window while she was asleep inside. She later planted hidden cameras into the home to spy on the Lassiters. When she was spotted by Ellen, who had actually known Kathleen's mother, the deranged Kathleen confronted Ellen at her home--accusing her of harboring hatred towards her mother. The confrontation ended with Kathleen pushing Ellen down the stairs, killing her.

Kathleen later began to cause a rift between Rebecca and Brian, while also serving as the former's personal trainer. She entered the home and planted her underwear under their bed, and then left a strand of her hair in their shower, to make Rebecca believe that Brian was cheating on her with a woman named Candice--leaving a note that furthered the illusion. While working with Ms. Lanier, Kathleen discussed Brian's affair, only to become alarmed that Ms. Lanier recognized her car parked near the home. To keep her from finding out the truth, Kathleen killed Ms. Lanier, doing so by bludgeoning her with a barbell. In her latest visit to Dr. Ross, Kathleen mentioned what she had been doing to the Lassiters, which alarmed Dr. Ross. Kathleen was told by Dr. Ross that she'll no longer receive counseling, and that she'll even inform the police regarding her actions. In response, Kathleen went into a rage and attacked Dr. Ross, choking her to death and claiming that she was crazy for interfering with her chance at happiness.

Kathleen visited Rebecca in the film's climax, but at his office, Brian had learned the truth about Kathleen--and it was confirmed when he phoned their realtor Angela Chasen. His call to Rebecca regarding Kathleen was intercepted by the latter, which prompted the psychotic villainess to grab a fireplace poker and attack Rebecca. After tying up Rebecca, Kathleen revealed her backstory and her plans to kill her and Brian to get her house back. Detective Carter entered the home after Brian called police, only to be killed by Kathleen. Brian entered and confronted Kathleen, only for her to strike him with the poker before going after Rebecca. Kathleen tracked Rebecca to the bedroom and found her under the bed, attempting to pull her from her hiding place, While doing so, Kathleen was shot and killed by Brian; a single shot in her back.

Kathleen watching and stalking the Lassiters 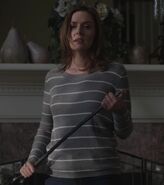 Kathleen clutching a fireplace poker
Add a photo to this gallery
Retrieved from "https://femalevillains.fandom.com/wiki/Kathleen_Strickland_(The_Wrong_House)?oldid=169833"
Community content is available under CC-BY-SA unless otherwise noted.