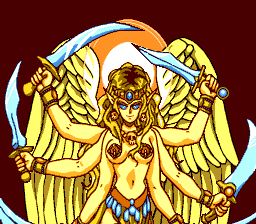 Karugari is the goddess of destruction. With intentions of resurrecting her, secondary villain Raikeru hatches a plan to pit Princess Minerva and her twin sister Princess Dynastar (the false primary antagonist of the story) against each other.

Once the two ultimately disover his ruse, Minerva and Dynastar then team up to defeat the goddess.

Retrieved from "https://femalevillains.fandom.com/wiki/Karugari_(Princess_Minerva)?oldid=168358"
Community content is available under CC-BY-SA unless otherwise noted.