The Female Villains Wiki
Register
Don't have an account?
Sign In
Advertisement
in: 2000s, Bondage Used By Villainess, Brunette,
and 25 more

Karma (Farrah Franklin) is the protagonist and hidden villainess of the 2009 film Single Black Female. She was an aspiring R&B singer and the sister of Wes, who she was roommates with along with her friend Crystal. She also had a boyfriend named Darnell, though their relationship was strained due to Karma's focus on her budding music career. The movie began with Karma and Wes finding Crystal after she seemingly committed suicide by shooting herself, with Karma later allowing her former classmate Skye to move in to help with the bills.

Over the course of the film, Blue Ray (another singer working under Karma's manager) was found dead in another apparent suicide and Wes began to notice Skye's bizarre fixation on Karma, leading him to believe something was off about her. But later on, when Wes went to talk to Karma at their house, she suddenly turned heel by stabbing Wes in the neck with a syringe, knocking him out. The evil Karma then cried out for Skye and acted as though she'd just found Wes when she arrived before drugging her as well.

Karma later tied Wes and Skye in chairs back to back and confronted them wielding a knife, tormenting them both before revealing to Wes the truth about Crystal's death: she had shot her dead and staged her death to look like suicide, having delusionally come to believe that Crystal was trying to have Wes to herself. After proclaiming that she had killed Crystal to get closer to Wes, Karma revealed that she'd learned through online research that she was adopted (something Wes hadn't known about) after her father abandoned her and her mother killed herself, while accusing her adopted parents (who she had stabbed to death previously) of caring more for Wes than for her.

It was then that Wes's friend Will came in and kissed Karma, revealing the two as lovers and murderous conspirators, as Karma revealed that she'd had Will kill Darnell and Will's ex-girlfriend Jade after learning that Darnell had been having an affair with her. Will proceeded to shoot and kill Skye, only for the evil Karma to take the gun and shoot him dead immediately afterwards, stating that she didn't need him anymore and was a "single black female" who didn't believe in relationships. After additionally killing Wes, Karma grinned at her deceased victims before calling 911, tearfully claiming to have walked in on the carnage. Karma's deception worked, with the police believing Wes to have been behind all of the murders, including Blue's, who Karma had also killed. The film ended with Karma (who was putting on a show of heartbreak) being comforted by Detective Lopez, with the deranged villainess laughing after Lopez walked away.

Karma in a hooded disguise, preparing to kill Crystal 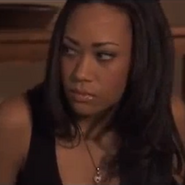 Karma during her villainous reveal
Community content is available under CC-BY-SA unless otherwise noted.