Start a Wiki
watch 01:39
The Loop (TV)
Do you like this video?
Kari Summers (Dana Sparks) is the hidden main villainess from "The Game Show," episode 6.10 of Matlock (airdate December 13, 1991). She is the popular hostess of It's About Time, which was emceed by longtime game show host Dennis Blake.

Kari was making $80,000 a year during her time on the game show, but it wasn't nearly enough for her. Unfortunately, producer Larry Fisher forbade her from taking any other projects without permission, so in order to make the extra income she felt she deserved, Kari decided to steal the questions and answers from the show and sell them to contestant Walter Beldon; which made money for both of them. Dennis found out about Kari's devious scheme, leaving the villainess facing the end of her career. During a meeting, Larry announced to Dennis that he was planning on firing him, and Kari decided to use that as part of her murderous scheme.

Kari used her electrical knowledge to place a timer on the lighting system, which would go off during taping of a show in Atlanta (where Ben Matlock attended with Conrad McMasters and Michelle Thomas). Once the lights went out, the evil Kari took possession of Dennis' apple peeler and (while wearing gloves) stabbed Larry to death. The plan was to frame Dennis for the murder, and with him in jail and Larry deceased, Kari could keep her villainous scheme hidden and go on to a lucrative career. However, Matlock and Conrad caught Kari dropping off the answers to the next show for Walter to pick up, so they in turn left an envelope with incorrect answers, which resulted in Walter losing in the final round.

Kari was cross-examined by Matlock in the episode's climax, which revealed not only her role in Walter winning on the show, but also her role as a villainess in Larry's murder. What also gave Kari away was the fact that she wrote the answers on stationery that named Dennis' replacement; with the evidence being presented during the testimony. Following this, Kari was arrested (off-screen) for killing Larry. 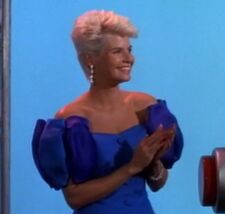 Kari working as a hostess 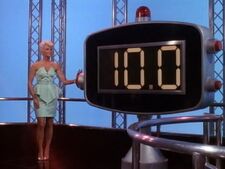 Kari next to the game show clock 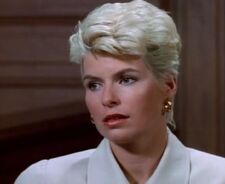 Kari's villainous reveal
Add a photo to this gallery
Retrieved from "https://femalevillains.fandom.com/wiki/Kari_Summers_(Matlock)?oldid=145032"
Community content is available under CC-BY-SA unless otherwise noted.