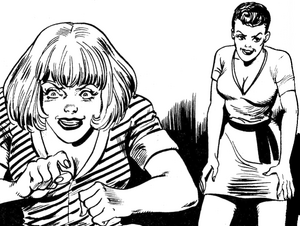 Karen and Cynthia are criminals who catch wind that a man named Professor Laughridge has developed an incredible new invention and decide to steal it. The two hide it inside of a trunk in the room they are staying in at a Los Angeles hotel, but realize that they have no idea what the invention does. In order to find out, the two send their henchmen Murdoch and Burt over to the scientist's home. When Laughridge refuses to hand over the plans, the henchmen start to rough him up, but end up accidentally killing him before he can spill the beans.

Meanwhile, the protagonist - a bellhop named Ward - catches a woman entering their room and rummaging around. Unbeknownst to him, the woman is actually a private investigator named Penny Alcott who has been trailing Karen and Cynthia for some time now. The ignorant hotel employee tries to bring her to the manager, but before they can exit the room, the four criminals return; forcing Penny to hide in a closet and Ward to hide inside of the trunk. When Cynthia discovers Penny, the villains deduce that she must have been sent by Laughridge to get the invention back, and thus, must know how to operate it. The criminals then take both the trunk and the investigator back to their hideout.

Karen tells her boys to give Penny the same brutal beating that they gave Laughridge, but the henchman state that they want to rape her first and that there will be plenty of time for the real violence later. While all of this is going on, Ward discovers that he has now turned invisible and comes to the conclusion that it must be because of the professor's invention. Once the rape has finished, the criminals decide that it is time to start using instruments of torture. Knowing that he cannot let this happen to the hostage, the invisible bellboy manipulate's Murdoch's arm so that he hits Karen instead of Penny. Ward follows up with several more acts of "unintentional" friendly fire until Karen and Cynthia find themselves in a shootout with Murdoch and Burt. With his distraction perfectly executed, the invisible man unties Penny and leads her to safety. As for the criminals, Karen finally has enough and attempts to use the invention on the two henchmen. Because it is an unstable prototype, however, the invention explodes, killing Karen, Cynthia and the men.

Retrieved from "https://femalevillains.fandom.com/wiki/Karen_and_Cynthia_(Ward_L%27Invisibile)?oldid=174275"
Community content is available under CC-BY-SA unless otherwise noted.