Set up her husband as the killer (failed)

Karen Bright (nee Burris) was the wife of Charles Bright, and the couple had two children together--a daughter named Amy and a son (whose name wasn't revealed). As revealed later on, Karen had a deformity:  her left foot only had two toes--a big thumb toe and a pinky. She became insecure and harbored jealousy of other women due to her own deformity, and about a dozen years before the events of the episode, Karen turned heel and became a deranged serial killer. Karen would drug random women and later strangle them to death, after which she would gnaw off the toes of her victims' left foot. Karen murdered fourteen women in such a fashion, and would leave the bodies near interstate highways.

Karen also worked as a substitute teacher at Pillar High School sometime in 2001, and it was during her brief time there that she murdered Charles; stabbing him to death with a screwdriver. Charles was working at the school, giving Karen the opportunity to kill him, after which she stuffed his body inside the chimney. A motive was never revealed, though it can be suggested that Charles had found out about Karen's murderous actions. Before hiding her husband's body, the evil Karen placed a severed toe inside his body, and afterwards, the psychotic villainess continued her old habit and killed four more women.

Charles had been suspected of the murders, but Karen's frame job furthered the suspicion by FBI Agent Tobias Fornell, who had been after the killer since the murders began. After Charles' body was discovered, Fornell and Leroy Jethro Gibbs went to the Bright home and spoke to Karen, who portrayed a grieving widow and denied that her husband was a serial killer, saying that he was wonderful and loved by many. Following the revelation that Charles himself was murder, NCIS and Fornell search Pillar's group of teachers to see if any of them killed him, but it was Tony DiNozzo's discovery of Karen's history with them that revealed her as her husband's killer.

In the episode's climax, Karen was interrogated by Gibbs and Fornell, and she continued her act, stating that she did kill Charles after finding out what a monster he was, while also revealing her deformity. While Karen was sobbing and Fornell was comforting her, Gibbs received a call from Abby Sciuto, who revealed that the four bodies found were killed more recently--after Charles' death. After this, Gibbs informed Fornell to get away from Karen, as she, not Charles, was the true serial killer. Her evil secret revealed, Karen turned off her facade and gave an ominous glare, revealing her true villainous persona. Following the reveal, Karen was arrested (off-screen) for the immense amount of murders. 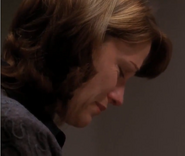 Karen "sobs" during her interrogation... 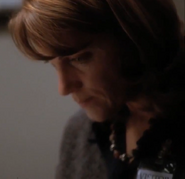 ...but after the truth is revealed, Karen's crocodile tears stop...

...and she gives an evil glare, revealing Karen's true demeanor
Add a photo to this gallery
Retrieved from "https://femalevillains.fandom.com/wiki/Karen_Bright_(NCIS)?oldid=212673"
Community content is available under CC-BY-SA unless otherwise noted.