Start a Wiki
watch 01:48
The Loop (TV)
Do you like this video?
Karen (Meilani Paul) is a secondary villainess in the 2000 action film "Submerged".

Karen is a henchwoman for a group of terrorists who are attempting to recover a missle-launching computer from a jet they plunged into the sea.

Karen first appears in the hotel room of pilot Capt. David Rogers (Christopher Halsted).  David proposes to Karen, and after she says yes, they are interupted by who he thought was his friend, Richard Layton (Fredric Lehne).  However, Karen then appears with a pistol on David, and Richard uses chloroform to knock him out.  Karen then uses a needle to inject him with poison that kills him within 15 seconds.  Karen hands Richard an envelope full of cash, and tells him that it is a downpayment, and they will double it when the job is done.  However, Richard demands triple payment, and she agrees.

Next Karen is shown checking in by phone with Owen Cantrell (Tim Thomerson), who assures her that they will get the money back from Richard after they no longer need him.

As Karen is once again on the phone with Cantrell, Agent Wendy Robbins (Yvette Nipar) trips a laser at her house, which alerts her that their is an intruder.  Karen grabs the computer and rushes out to her car to make a getaway.  In a car chase, Karen crashes off the side of the hill.  She is able to jump out just prior to her car exploding into a small building at the bottom of the hill.

Karen arrives in a car at Cantrell's home along with a Mr. Drago (Ari Barak) in an attempted arms deal.  During the negotiations, the FBI arrive.  Karen uses a machine gun to kill Mr. Drago and his two men, and then she and Cantrell take the briefcase full of money.

Outside the house, they are confronted by an armed Agent Robbins.  Karen confidently tells her accomplices to go ahead and when they start to move, Robbins focuses on them, and Karen easily kicks the gun from her hands. The two women engage in a fistfight involving back and forth blows to the belly. Karen proves stronger and more skilled and punches Robbins down, and runs to join the men.  Karen, Cantrell, and another henchman speed off in a U-Haul truck.  However, two FBI agents use a bazooka to shoot the truck into a large explosion. 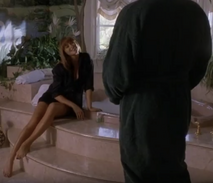 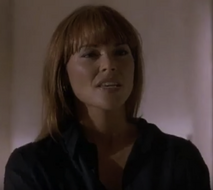 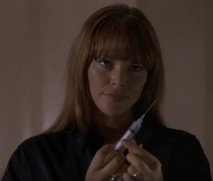 Add a photo to this gallery
​​​​​
Retrieved from "https://femalevillains.fandom.com/wiki/Karen_(Submerged)?oldid=133332"
Community content is available under CC-BY-SA unless otherwise noted.