Karen is a henchwoman of the villain, Roach Driver (Rob Wilson). She dresses like a member of some sexy female biker gang, wearing a leather teddy with spiked boob area, PVC jacket and knee-high black suede boots. She is armed with a tranquillizer pistol. Karen seems to enjoy getting angry and inflicting pain and even death upon subordinates as well as enemies.  Karen is a two member team along with Gina (Dyanne DiMarco).

She is ultimately killed when the hero's temporarily super-powered girlfriend rips out the heart of Gina and throws it like a frisbee into her mouth.  She then grabs her head and smasshes it through a window.

Karen spends the movie assisting Roach in his quest to obtain a super-power serum which he believes will restore him to his former uncrippled self. Her first task is to capture a test subject for the serum which their resident scientist believes he has recreated. She does this by posing as an erotic dancer and enticing a customer to meet her out back after the show. Once she has him alone she grabs him by the balls which causes him to collapse to his knees in pain, she then knees him in the face, causing him to collapse at her feet, which brings her great pleasure. Then along with her Cher lookalike co-henchwoman, Gina, takes him for testing. We next see Karen and Gina force the pleading test subject down onto his knees and inject him with the serum. He transforms, starts foaming at the mouth and goes berserk. Karen and Gina both fire their tranquillizer darts at him. Gina gives the prone man a good kick to be sure the test subject is dead.

The villain, Roach is furious at their scientist's incompetence and several times orders Karen and Gina to kill him, a prospect they both seem to relish, especially Karen who throws him onto the hood of a car. The scientist saves his life by informing Roach that one man did survive the serum, Billy Duncan (Joe Tabb), the son of a scientist he once knew. The scientist explains that the serum can be sexually transmitted from Billy. Roach then plans to have his henchwomen mate with Billy to obtain the serum.

Gina, the Cher lookalike, leads an assault on the Duncan residence to capture Billy, but fails and ends up being hit with her own tranquillizer dart due to Billy's superhuman strength, speed and, well, wristwatch. Billy's stepmother Lorna Duncan (Shannon Tweed), who is secretly attracted to him, manages to escape. Some time later, Karen arrives with backup and is appalled at Gina's failure and the failure of the pathetic henchmen. She knocks one henchman to the ground with a punch, then picks on another. "You let him get away" she says, kicking him to his knees, then twists and breaks his neck (the cameraman deciding a rear perspective showcasing her backside is the best shot for the scene). The henchman falls dead at Karen's feet and she shouts at some more cowering henchmen to find Billy.

Karen then finds Billy herself and fires a tranquillizer dart at him. She has lots of fun beating him up, kicking him about and kneeing him in the face repeatedly. Somehow Billy manages to use what's left of his superspeed and manages to tie Karen to an overturned van. Gina turns up to free her and they both confront Billy on a hill with their tranc guns. He manages to escape again by rolling down the hill and catching a ride with his annoying girlfriend, Mary.

Meanwhile, Lorna is under the protection of a powerful friend and his small band of men at his log cabin. Karen and Gina turn up disguised as cheerleaders and kill almost everyone using a combination of kicks, punches, neck snappings and gunfire. They taunt one helpless man who lies at their feet before shooting him dead. They also knock Lorna unconscious with a rifle-butt.

Roach has Lorna strapped down at his lair and knowing she secretly lusts for Billy, uses this against her and manages to get her to embrace her inner evil and lust and cast off her inhibitions. Part of this unlocking of her lust and evil involves Gina ravishing her. Later Billy and Mary show up for a rescue attempt, not knowing that Lorna has gone evil. Billy infiltrates Roach's base and finds his mother tied up. Lorna tranquillizes Billy who slumps to the ground, betrayed and helpless. Meanwhile Karen and Gina ambush Mary and after a brief skirmish, tranquillize her, mocking her failure while they do so.

Meanwhile, henchwomen Karen and Gina are sent to kill Mary in a holding cell. Unknown to them, Mary has taken one of Billy's super-pills. Mary does somersaults before palm-striking Karen in the face, then head-butting Gina who falls to the floor. Karen tries to punch her, but Mary grabs her fist, forces her to her knees and then knees her in the face. A worried Gina looks on in fear at Karen's failure. Mary then turns her attention to Gina and punches into her ribcage and rips out her heart. She throws the heart through the air like a Frisbee and Karen catches it in her screaming mouth. Mary then smashes Karen's head through a window, killing her.

Back in the lab, Lorna climbs on top of Billy and engages in some carnal acts while quietly convincing Billy that she is really on his side and is just playing for time. Lorna is lying of course and "obtains" the serum from a shocked and betrayed Billy. She then transforms into Electra, the evil super-villainess. In another room Electra tries to imbue Roach with the serum in an erotically-charged scene before being interrupted by an escaped Billy. Electra easily defeats Billy with her new lightning-fingers powers leaving him in a heap. "I'm going to love you to death", she says, about to finish him off before the annoying super-powered Mary shows up.

Mary and Electra have a long fight while Billy and the wheelchair-bound Roach have their own duel. Electra seems to have some transformative powers and becomes vampiric, sprouting fangs and slashing the throat of Mary with her long fingernails. Mary slumps to the floor and seemingly dies. Billy has won his duel and then confronts Electra who tries to convince him to join her. He refuses and there is a long fight. Billy is almost completely outclassed and at the end of the fight Electra kicks his legs away, forcing him onto his knees. He is completely at her mercy and she tells him to beg for his life. Billy then tries to take one of his pills which Electra snatches away from him and swallows. It's a trick though and Electra explodes.

Somehow the death of Electra rejuvenates Mary and everyone lives happily ever after. Except possibly not, since at the end we see that Electra has somehow survived and swears revenge, leaving the door open to a sequel which sadly never happened. 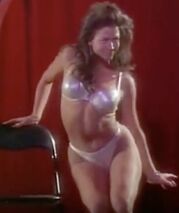 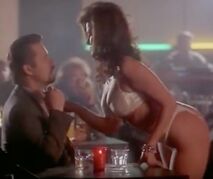 Karen captures a test subject, grabbing his balls and then kneeing his face, which she thoroughly enjoys 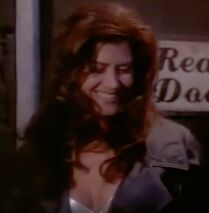 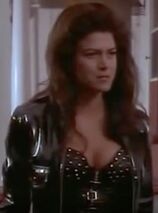 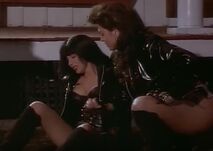 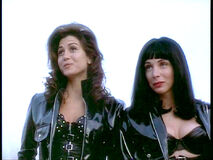 Karen and Gina confront the hero. 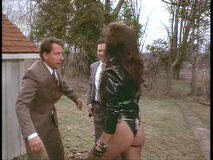 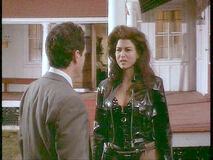 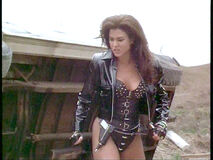 Karen, just after kneeing the hero in the face. 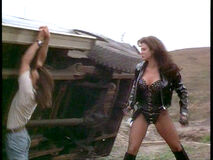 Karen throws the hero against a van. 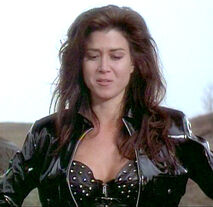 Karen gloats over the defeated hero. 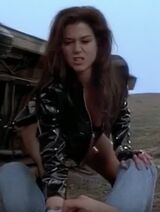 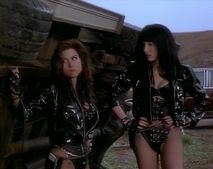 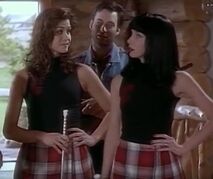 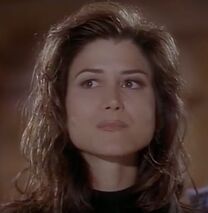 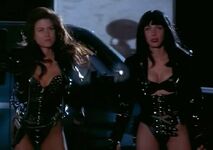 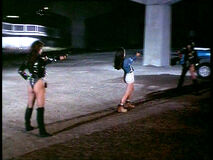 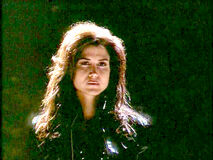 Karen at the testing facility. 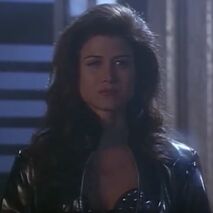 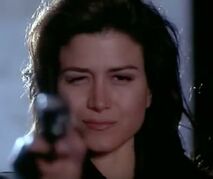 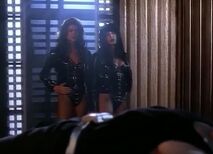 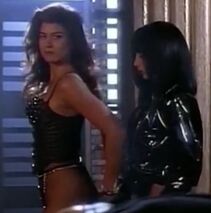 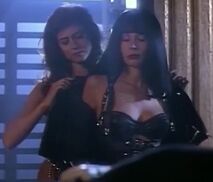 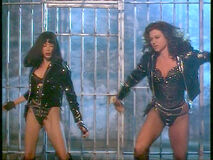 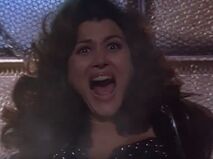 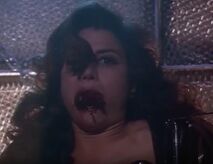 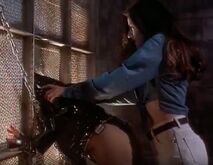 Add a photo to this gallery
Retrieved from "https://femalevillains.fandom.com/wiki/Karen_(Electra)?oldid=181558"
Community content is available under CC-BY-SA unless otherwise noted.