The Female Villains Wiki
Register
Don't have an account?
Sign In
Advertisement
in: 1990s, Bare-Handed, Boots,
and 19 more

Kara (Corinna "Cory" Everson) is a henchwoman in the 1991 action film DOUBLE IMPACT.   Jean-Claude VanDamm plays a double role as twin brothers out to find their parents' killers in Hong Kong.

Kara handles Griffith's dirty work with her signature weapon, a balisong. She lusts after Danielle (Alonna Shaw), who searches the offices for evidence to help the brothers. Kara's suspicions and lust leads to her searching, molesting, and bugging Danielle. Her bug would allow her and the other triad henchmen to ambush Chad, one of the brothers. Though Danielle and Chad escape, she'd track them to their hideout. Again, the brothers alluded her, but she was able to capture their companions and bring them to a tanker. Their, in the boiler room of the ship, Kara tortured the brothers' companions for information.

The climax comes in the boiler room where the muscular Kara fights Danielle's boyfriend, Alex. Kara drops from overhead and wraps her legs around Alex's neck, attempting to crush it with her thighs. Alex turns to face the backless catsuit wearing Kara, and after much struggling, pulls her down from the grating above. Kara boxes his ears and then pulls out her bailsong. After taunting Alex ("It's you and I, dickhead. Come on!"), the two of them circle each other, only breaking eye contact to size one another up. Kara strikes first, slashing Alex across his stomach, then grabbing his testicles. To prevent her from ripping them off, Alex grabs her wrist, then gives her a brutal haymaker to the face that knocks her arcross the room. Unlike some of the other henchmen, Kara recovers quickly and attempts a pipe shattering kick to the brother. But Alex is ready and dodges and grapples her. As he grabs her knife hand, Alex wraps his other arm tightly around Kara's midriff and hugs her to him. Now, fully restrained, Kara can only helplessly watch as Alex slowly but surely pulls her bloodied knife towards her waist. Thinking the fight is done, Alex lets himself get distracted during the arm struggle by his brother arriving on scene, giving Kara enough slack to twist herself around and pin his neck. However, this last desperate attempt is not enough, and all she accomplishes is staring Alex in the eyes when her arm finally gives out and he penetrates her. 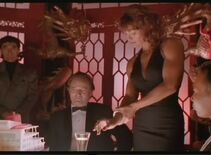 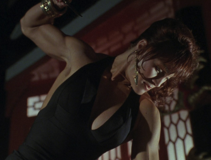 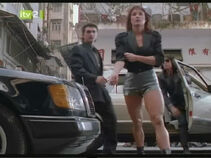 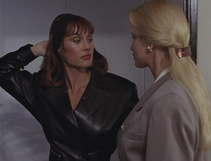 The lesbian Kara toys with a timid girl (Alonna Shaw) 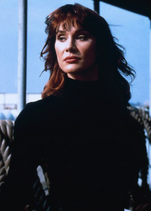 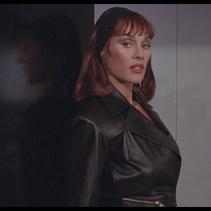