Kama and Sutra were the minions under the command of Captain Nirvana (Raquel Welch) of the Black Army. They were a sultry race of women from the planet Necroton. They had come to invade and destroy Earth. Nirvana and the two henchbabes arrived at Mindy's apartment and kidnaped Mork (Robin Williams) and took him back to their ship in order to interrogate and torture him. The did this in was was called the spaceship's chamber of pleasures.

Kama and Sutra were dressed similar to Captain Nirvana, but in several portions they wore something more revealing. They started out wearing a baby blue leotard. They had a belt that included a single flap like skirt that only covered the front. They had silver boots that came up to the lower calf. They had a blue hat that allowed their long hair to come out of in a ponytail down past their waist. They had silver gloves, and ruffles at the shoulders.

Later they appeared in silver sequined robes. When they disrobed they had on matching silver bikinis and silver high heels. With these outfits they attempted to seduce Mork by taking him into a hot tub. At the end of the take, Robin Williams refused to get out of the hot tub because he had an erection. I can't blame him at all. When this seduction failed, they were forced to go after Mork's "pet" Mindy. Here they appeared back in their former baby blue leotard space suit.

Kama and Sutra imprisoned Mindy into the giant bird cage. When Captain Nirvana failed to gather information from Mork, they began to turn on her. They were about to zap her to vapor, when Mindy reached through the bars and took the control. Mindy then controlled all three aliens.

Captain Nirvana agreed to allow Mork and Mindy to go unharmed, and she imprisoned her henchwomen, Kama and Sutra into the same bird cage. When Mork asked what she planned to do with them, she responded that "I'm gonna try to teach them what you taught me, but if that doesn't work, I think I'll have them stuffed." This is where they remained at the end of the show, when Mork and Mindy were allowed to leave the space ship. It is interesting to note, that according to Howard Storm, "Raquel Welch was any director's nightmare." In addition to various other annoyances, she was so afraid of being upstaged by the other Necrotons that she refused to enter the stage after them. Then she suggested they wear dog masks and she drag them around on leashes. Storm says he told her, "Raquel, your character is too strong. You don't need to have them in dog masks or leashes. All you need to do is snap your fingers. Those girls will drop to their knees." From my vantage, she may have already been out staged by them. They were gorgeous in their bikinis, and very large distraction. Also, if she had dragged them around on leashes, they may have up staged her even more. 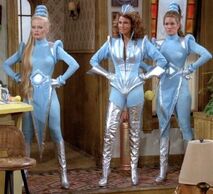 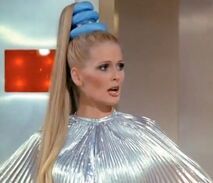 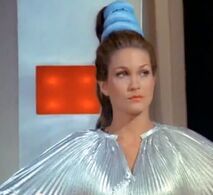 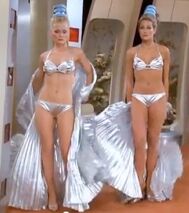 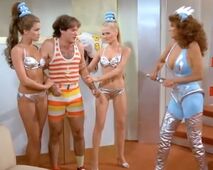 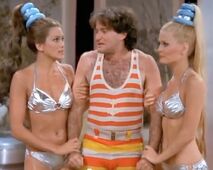 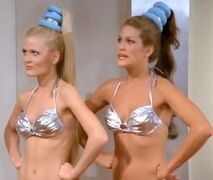 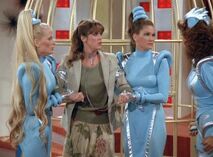 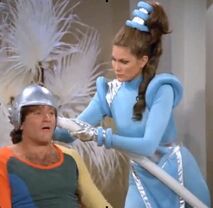 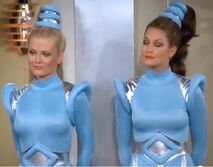 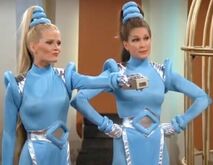 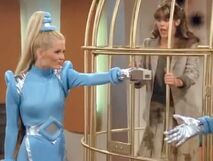 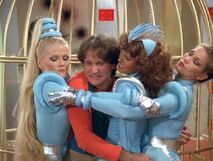 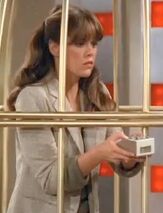 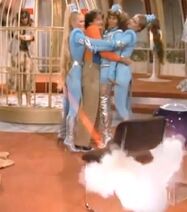 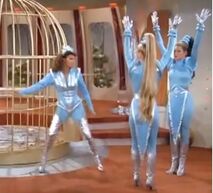 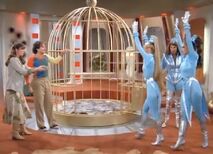 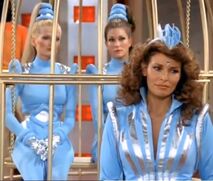 Add a photo to this gallery
Retrieved from "https://femalevillains.fandom.com/wiki/Kama_and_Sutra_of_the_Necrotons_(Mork_%26_Mindy)?oldid=104619"
Community content is available under CC-BY-SA unless otherwise noted.