The Female Villains Wiki
Register
Don't have an account?
Sign In
Advertisement
in: 2010s, A Taste Of Her Own Medicine, Animal Weapon,
and 23 more

Kaiyo is a gorgeous woman with long spiky dark purple hair and light purple eyes, with makeup. She has huge breasts and wears a short white dress, with a matching white long cape scarf, which holds by a insect jewelry.

She wears a long dark glove, which she takes off during her battle with both Sasuke and Kakei, as well as a red left wristband. She also has a long pink sash back and front, which descends down to her ankles. She wears sandals and thigh highs.

Kaiyo is arrogant and gleeful, just like her sister. She is devious - like when Sasuke snuck up behind ordering her to leave and she refused because she has been instructed to kill all the braves. He told her to prepare prepare to die and she surprisingly gave him a kiss, putting an poisonous insect in his mouth. He jumped away and she teases him for rejecting her kiss.

Kaiyo made her debut in episode 10 as one of the Iga League of Five ninja assassins. She was sent to kill Brave 10 members Kakei and Sasuke, but also claims she hates them because they killed her villainess sister.

Kaiyo gleefully attacks using swarms of insects as primary weapons. She casts a spell, protecting herself from harm high on an earthen pillar. Sasuke gets near her once on the pilar, but Kaiyo uses a surprise kiss to transfer a poisonous bug. The insects poison Kakei as well and Kaiyo laughs as they are dying. The battle turns against Kaiyo when an artificial darkness falls. Her insects fly away in confusion. Kakei and Sasuke counter attack destroying her pillar.

Kaiyo still believes she is beyond harm as Sasuke traps her with his poisonous vine. Kaiyo struggles against the vines as they constrict, unable to cast a spell. Kaiyo pleads as the poison spreads, while Kakei and Sasuke silently look on. Kaiyo collapses to the ground ground, near death. Kakei says dismissively “Let me put you out of your misery”. Kakei shoots with his explosive rifle, obliterating Kaiyo. 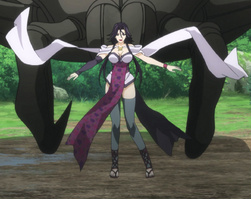 Kaiyo explaining they have no chance against her power 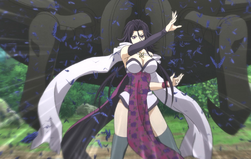 Above harm and in control (scan mod) 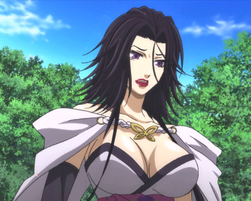 Worried that opponents might be more powerful than she initially thought

Kaiyo poisons Sasuke with a a kiss (scan mod) 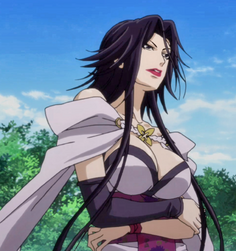 Confident she will be victorious (scan mod) 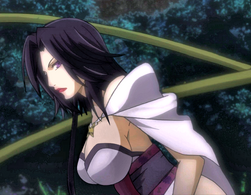 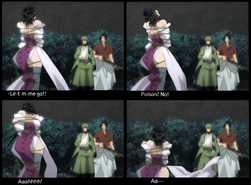 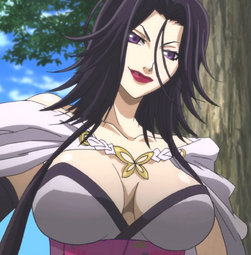