Kaede Kazama is an villainess of the anime series called "Killing Bites" and appears in episode 5 of the only season 1.

She is an typical for a reptile brute, Kaede is very sadistic and arrogant. Even when up against the likes of Nakanishi Taiga, she maintains her arrogance.

In human form she has short dark blue hair and blue eyes. She usually wears a leotard of sorts during the Killing Bites. In her first hybrid form, she grows a tail, her arms become brown and covered in gecko skin. In her second form, her head and feet become those of a large Gecko (although her hair remains intact)

Unlike most hybrids she combines her hybrid powers with martial arts, being a gecko she can cling to surfaces most animals can't.

Vander Slap: Kaede grabs onto an opponent with her sticky hands and tosses them about like a ragdoll. 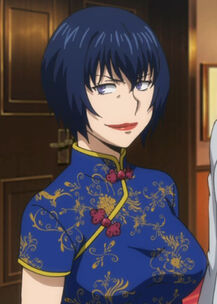 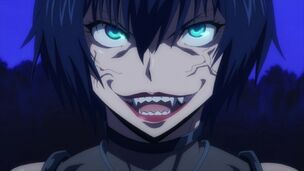 Add a photo to this gallery
Edit

Retrieved from "https://femalevillains.fandom.com/wiki/Kaede_Kazama_(Killing_Bites)?oldid=127515"
Community content is available under CC-BY-SA unless otherwise noted.