Start a Wiki
watch 01:48
The Loop (TV)
Do you like this video?
Justine (Kristi Clainos) was a villainess from the 2009 film, War Wolves.

Justine was one of several Army soldiers infected with a virus that turns them into werewolves, and after returning home, Justine formed a villainous alliance with fellow she-wolves Erika and Casey. The trio went on a rampage against humanity, beginning with an attack at a local tavern. Justine and Casey went after a group of people in a church in the film's climax, but at that instant, Justine would later be confronted by Erika, who gave up their cause and rekindled her relationship with Jake Gabriel. The two ended up engaging in a vicious brawl, which ended with the evil Justine killed by Erika. 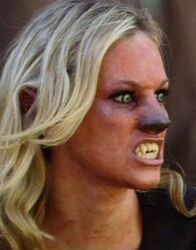 The evil Justine in her werewolf form

Werewolf Justine howling
Add a photo to this gallery
Retrieved from "https://femalevillains.fandom.com/wiki/Justine_(War_Wolves)?oldid=86724"
Community content is available under CC-BY-SA unless otherwise noted.