Start a Wiki
watch 01:51
The Loop (TV)
Do you like this video?
Julie Rollins (Mel Harris) is the main villainess from "And Here's To You, Mrs. Azrael," episode 3.09 of CSI: NY (airdate November 15, 2006). She is a volunteer nurse and the mother of Heather Rollins.

Heather was the best friend of Nicole Garner, and while driving from a party, they ended up in a terrible car crash. It was stated in the episode that Heather was killed on impact, while Nicole was left in a coma, and regarding the girls' friendship, Julie had warned Heather to stay away from Nicole due to her drug and party habits. When the accident occurred and Nicole was sent to her hospital, Julie harbored an intense hope that Nicole wouldn't come out of it, as she was angry and grief-stricken over losing Heather, and had blamed Nicole for taking her daughter from her.

In the days that passed, Nicole came out of her coma, but after learning this, Julie turned heel and killed Nicole out of revenge for Heather. The sinister villainess entered Nicole's room and removed Nicole's EKG before suffocating her to death with a plastic bag, and in the beginning of the episode, Julie was shown hugging Nicole's mother, Ellen Garner, feigning grief to mask her villainous persona. Nicole's death was mostly suspected as a mercy killing, though attention turned to Ellen when it was revealed that she had a life insurance policy written out on her. Julie was eventually revealed in the episode's climax after Mac Taylor and Stella Bonasera took blood samples from the accident. During her interrogation, the evil Julie voiced her hatred of Nicole and stated that losing Heather added more grief following the loss of her husband a year prior, while adding that she hoped that Nicole would remain in her coma and that she didn't deserve to live.

Just as Julie prepared herself for arrest, Mac and Stella made a shocking revelation. While it was believed that Nicole was the driver that fateful night, the blood samples revealed that Heather was actually the one driving, as the intoxicated Nicole gave her license to the more clear-headed Heather. Because of the girls' very similar looks, Heather was identified as Nicole in the hospital, meaning that Nicole was killed days ago and that the girl who Julie killed was actually her own daughter. The villainess accused the pair of lying at first, but she quickly expressed shock when she realized that it was the truth, as she remembered that Heather called out, "Mom," upon seeing her. However, Julie's heel persona had consumed her at that time, as she cruelly snarled to "Nicole" that her mother couldn't help her before killing her own daughter. Julie broke down after realizing what she had done, and she was arrested (off-screen) afterwards. 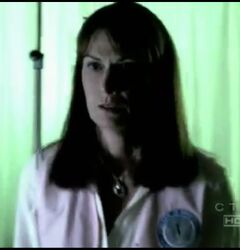 Julie killing her daughter, Heather, mistaking her for Nicole Garner
Add a photo to this gallery
Retrieved from "https://femalevillains.fandom.com/wiki/Julie_Rollins_(CSI:_NY)?oldid=144299"
Community content is available under CC-BY-SA unless otherwise noted.