Start a Wiki
watch 01:51
The Loop (TV)
Do you like this video?
Julie (Pat Stevens; 1945-2010) is the main villainess from "The Beast is Awake in Bottomless Lake," the last episode of The Scooby Doo Show (airdate December 23, 1978). She runs the Johnsons' Family Market in Bottomless Lake, Canada, and when Mystery Inc. visited, Julie introduced herself as the owners' daughter.

As it turns out, Julie was not the owners' daughter; Velma sensed this when Julie's supposed pet cat backed away from her when she got closer. Julie had heard about the gold stolen from the Klondike mine three weeks prior, and planned to collect it for herself. She and her henchmen colluded to smuggle the gold to the U.S., and to scare off townspeople, Julie disguised herself as the Beast from Bottomless Lake, a giant fish-like creature.

Julie's defeat and reveal came when she, Shaggy, and Scooby were caught in a net during their chase, and following this, Velma revealed the Beast as Julie. After the reveal, Julie and her henchmen were arrested. 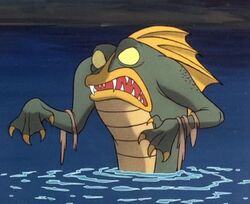 Julie disguised as the Beast 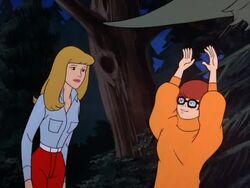 Julie unmasked
Add a photo to this gallery
Retrieved from "https://femalevillains.fandom.com/wiki/Julie_(The_Scooby_Doo_Show)?oldid=152448"
Community content is available under CC-BY-SA unless otherwise noted.