Start a Wiki
watch 01:51
The Loop (TV)
Do you like this video?
Julie (Julie Jelaco) is the villainess of the 15-second horror film, The Date (released in 2015). She was introduced as the date of the film's unnamed male protagonist, who he had met online.

The film opened with the man coming to Julie's house and meeting her at the front door. Julie's immediate reaction upon seeing her date was pointing out how he'd had a beard in his profile picture, while it was revealed that the blonde was holding a knife behind her back. The man revealed that he'd shaved his beard and asked Julie if it was a problem. In response, Julie officially turned heel by stating it would be a problem for him, with Julie's eyes turning black revealing her as a demon. The film ended with the evil Julie pulling out her knife and plunging the weapon towards her date, presumably killing him off-screen. 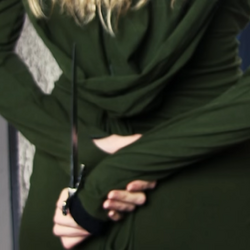 A close-up on Julie's knife 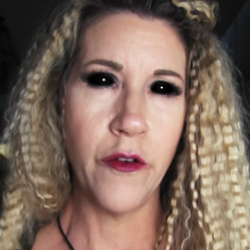 Julie's demonic reveal
Add a photo to this gallery

Retrieved from "https://femalevillains.fandom.com/wiki/Julie_(The_Date)?oldid=195893"
Community content is available under CC-BY-SA unless otherwise noted.