Start a Wiki
watch 01:48
The Loop (TV)
Do you like this video?
Julia Brine was a recurring villainess from Criminal Case: The Conspiracy, the 5th season of the crime solving game Criminal Case. She was the CEO of AgriMeadows, an agribusiness operating out of Grimsborough's Spring Fields district. Julia was introduced in case #44, "A Crime Like No Udder", before being revealed as a villainess in the succeeding case, "A Pointy End".

The Grimsborough PD officers had come to Spring Fields in search of a figure known as "Fornax", a member of the former secret society Ad Astra led by Rozetta Pierre, whose members believed in selective superiority and wanted to rule over those they considered lesser than them (referred to as "sheeple"). The police's arrival in Spring Fields was welcomed by the destruction of the town's corn crops in a fire; an act orchestrated by Fornax when they paid corn farmer Cody Mays to set the fire.

By the events of "A Pointy End", the police team had discovered evidence that AgriMeadows was responsible for the corn field fire, and appeared to be planning to capitalize on the crop loss by selling pre-grown corn crops. But as revealed during the case's conclusion, Julia's true plan was revealed: the corn crops she was planning to sell to the Spring Fields farmers were infused with the Protozane that Rozetta had previously shipped to Spring Fields, with the reveal coming when Amir Devani tested a recovered sample of the corn. The player and Gloria later returned to AgriMeadows HQ and found a safe disguised as a painting, which contained documents revealing Julia not only as the mastermind behind the field fire, but as none other than "Fornax", with a list also showing the code names of the other three members of Ad Astra (all of which were named after constellations).

The player and Gloria confronted Julia as they placed her under arrest, with the villainess initially feigning innocence before angrily blasting the players for exposing her, claiming her capture and the destruction of all her malicious work was the result of "sheeple" being in charge and that Protozane was the greatest achievement of all mankind. Julia was placed under arrest by Gloria, subsequently resulting in AgriMeadows being shut down.

By case #54, "Breaking News" (release date January 24, 2019), Ad Astra's full plans were revealed: to use Protozane as a means of creating a superhuman serum to use on themselves. It was also revealed in the case that a mysterious figure (later revealed as Denise Daniels, head of S.A.R.A and Rozetta's mother) who had been leading Ad Astra all along was now intent on killing them for outliving their usefulness, enlisting former DreamLife scientist Dr. Shweta Noorani to kill Lous Leroux when he began trying to warn his Ad Astra cohorts of the danger. After Louis' murder was solved, it was revealed that Rozetta and Julia had been broken out of prison by their fellow surviving cohorts Christian Bateman and Joe Warren, with the player joining Gloria and Rita Estevez in going to arrest the group after they were tracked down to a cave they were using as a hideout.

But upon arriving and trying to apprehend the group, the nefarious Ad Astra members revealed they all had supernatural powers as a result of their serum, with Joe using his telekinetic powers to disarm the officers. The evil Julia then revealed she had the power to produce a poisonous gas--which she was now using to incapacitate Gloria's son and ex-husband Carter and Jake. After Julia boasted that the team would have to choose between rescuing Carter and Jake or chase after them, Rozetta used her powers to knock out the officers before Julia and her cohorts fled the scene, taking Carter and Jake with them to use as a distraction to keep the police off their trail.

Case #57, "Reap What You Sow" (release date February 14, 2019), saw Christian being found murdered near the helicopter he had bought as part of Ad Astra's plan to evade capture, with the player and David Jones eventually tracking Julia down to a farmhouse in Spring Fields after a raid of Ad Astra's new hideout (which also saw them capturing Joe). The detectives donned gas masks before confronting Julia, leaving her power ineffective against them much to her dismay. After realizing she went to the farmhouse due to feeling confined at her group's new hideout and becoming shocked at learning of Christian's death, Julia was placed under arrest.

Julia was questioned again after a hologram message discovered at the Ad Astra hideout revealed the true extent of her relationship with Christian: she had become intensely attracted to him, only for Christian to callously reject her. During the interrogation, Julia begged to be let out of her cell due to her claustrophobia before confessing to being in love with Christian, expressing heartbreak at his rejection and revealing that her true reason for leaving the hideout was to get away from him. Julia was proven innocent in Christian's murder when Joe was revealed to be his true killer, with Julia remaining in custody for the crimes she had committed while working for Ad Astra.

Case #59, "Eve of Disaster", had Julia joining Rozetta and Joe in cooperating with the police to defeat Denise, with the trio confronting Denise as she and her newly made army of neohumans were roaming the streets of Grimsborough. Julia attempted to use her powers to subdue Denise, only for one of the neohumans to take the hit instead and reveal her powers had no effect on them. After Denise killed Rozetta with a bullet to the head, the same neohuman threw a grenade at Julia and Joe, with the following case, "Blaze of Glory", revealing that Julia was killed in the ensuing explosion. 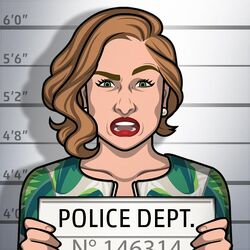 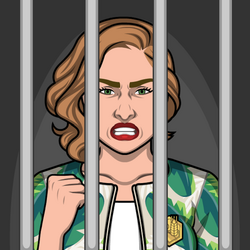 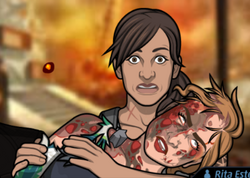 Julia's deceased body
Add a photo to this gallery
Retrieved from "https://femalevillains.fandom.com/wiki/Julia_Brine_(Criminal_Case)?oldid=196208"
Community content is available under CC-BY-SA unless otherwise noted.