Start a Wiki
watch 01:51
The Loop (TV)
Do you like this video?
Julia (Maya Rudolph) is the main villainess from "The Homer of Seville," episode 19.02 of The Simpsons (airdate September 30, 2007). The episode had Homer becoming a popular opera singer after a back injury, with his operatic tones coming out while he was lying down at the hospital. When Homer and Marge are pursued by a group of obsessed fans, they are saved by Julia, who rode them back home on her motorcycle.

Julia is later invited into the Simpson home, where she mentioned that some fans make the rest look bad, and decides to serve as the president of Homer's fan club. After Marge leaves, however, Julia's own obsession is revealed when she undressed in front of Homer and attempted to seduce him. She warned Homer that if he told her about Julia's advances, she would tell Marge that Homer attacked her, prompting Homer to keep quiet about Julia's psychotic demeanor. Since then, Julia relentlessly pursued Homer, first by showing up at the plant in only a bra and panties, then by replacing Santa's Little Helper on the leash (while in a leather outfit), and finally by donning some of Marge's blue hair and laying on their bed dressed in lingerie. That was the last straw for Homer, as he informed Julia that he would never be with her, right before firing Julia.

Seeking revenge, Julia attempted to kill Homer, first by planting a cobra in a box of cereal (which Homer literally beat to submission). The crazed villainess later appeared dressed as a conductor during Homer's performance of The Barber of Seville, and attempted to fire a poisonous dart at him. Marge, having spotted Julia, diverted the dart towards Julia with a French horn, and following this, police fired shots at Julia and dropped a chandelier at her.

Miraculously (as Dr. Hibbert stated), the bullets and the chandelier actually saved Julia's life, as the poison was pushed out of the system. Now lying on a stretcher, Julia swore revenge on Marge, while also stating that she scheduled the cable guy to head to the house on Wednesday between 10AM and 2PM. Marge stated that Wednesday wasn't good for her, which was part of Julia's plan, as Julia laughed maniacally before she was arrested and taken away.

Julia in her full bodysuit 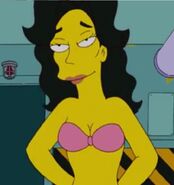 ...and while Homer was walking Santa's Little Helper...

...and even in the bedroom dressed as Marge

Julia disguised as a conductor

Julia seeking revenge after her defeat
Add a photo to this gallery
Retrieved from "https://femalevillains.fandom.com/wiki/Julia_(The_Simpsons)?oldid=187336"
Community content is available under CC-BY-SA unless otherwise noted.