Julia (Meghan Heffern) is the hidden main villainess of Lifetime Movie Network's 2016 film Best-Selling Murder (originally titled Serialized; airdate November 12, 2016). She was a close friend of novelist Hannah Ryan (the film's main protagonist), but their friendship soured when she became the mistress of Hannah's husband Jason. Julia was also supposedly an aspiring writer; in fact, Hannah was her mentor.

In a twisted attempt to achieve her goal, the delusional woman broke into Hannah's apartment and murdered Phillip Radcliffe—her former publisher—with his actual murder occurring after Hannah "killed" him in the first chapter of her latest novel: Bloody Mary Chronicles (which featured Bloody Mary as its titular main villainess). Later on, after the second chapter was released, the evil Julia attacked Darby in her apartment with a knife (though she survived) and (non-fatally) shot Austin before managing to escape.

Along with publishing the third chapter of Hannah's novel behind her back, she plotted to set up Jason to take the fall for her crimes, with the former's official villainous reveal coming after she stated that she faked her pregnancy after learning that her illicit lover and Hannah were having sex again. Julia had done so as a way of testing Jason's fidelity, but seeing that he failed (in her view), she took a knife and used it to stab Jason in his chest, claiming that she had to kill him in "self-defense" because he was going after her. With her reveal cemented, Julia admitted that Jason's murder was to be part of "her" novel, and shortly after that, the psychotic killer and the protagonist briefly argued before they engaged in a brawl with each other. Hannah knocked the knife from Julia's possession, which was followed by the former knocking out the latter and Jason finally dying (likely from blood loss). Although it is not shown, it can be assumed that the villainess was arrested offscreen for her murderous actions.

Julia in her villainous disguise as she kills Phillip 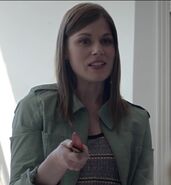 Julia after stabbing Jason
Add a photo to this gallery

Retrieved from "https://femalevillains.fandom.com/wiki/Julia_(Best-Selling_Murder)?oldid=177299"
Community content is available under CC-BY-SA unless otherwise noted.