Jubilee Swan (Chloe Babcook) is the main villainess from the 2017 Lifetime film, Deadly Sorority (airdate May 6, 2017).

The leader of the most exclusive sorority on campus, Jubilee Swan engaged in a brief relationship with married English professor Justin Miller a year and a half prior to the film's events. The affair only lasted a month until Justin broke it off, but Jubilee's feelings for Justin remained, to the point that she became psychotically obsessed with him. While following Justin, Jubilee learned about his tryst with sorority sisters Bree Jones and later Tanya Brown. With the belief that Justin wasn't really into Bree, Jubilee kicked Bree out of the sorority. However, with Tanya being a serious threat (in her mind), Jubilee instructed Tanya to return to the house, shortly before she killed Tanya.

Jubilee was introduced in the film during Kristina Roberts' initiation into the sorority, with Samantha Blake (the film's protagonist) accompanying Kristina. She and the other sisters quickly antagonized Samantha; keeping her from seeing Kristina during her process and even kidnapping her and tying her to a tree to warn her to stay away. Meanwhile, Jubilee continued her twisted obsession over Justin, and she had learned that he was carrying on another affair with Kristina. The villainess spotted Kristina out driving and got out of her own car and attacked her with a crowbar. After dragging Kristina out of her car, the evil Jubilee bludgeoned Kristina with the crowbar, killing her.

With Kristina's ex-boyfriend, Paul Riveria, possibly getting close to the truth, Jubilee attempted to kill him by drugging him and making it appear that he committed suicide, even typing a note on his laptop (though Paul ended up surviving). After this, Jubilee followed not only Justin, but was also stalking Samantha, who was under the impression that Justin was the killer. When she spotted Samantha in the bathroom looking through Justin's phone, she stole it (assuming it was Samantha's) and looked at the texts before throwing it in the toilet, damaging the phone just as Samantha had found the texts between Justin and Kristina.

Jubilee's villainous reveal came when she attacked Samantha, who ran out of Justin's home after discussing his trysts with his wife, fellow professor Amy Thomas, who became belligerent and made Samantha believe her to be the killer. She appeared dressed in all black and clutching a knife, while revealing that she was in love with Justin and that she killed Tanya and Kristina. The crazed villainess stated to Samantha that she would kill her so she and Justin would be together, but it was at that moment that Justin appeared and attempted to talk her down.

Jubilee also revealed that she planned to frame Amy for the murders, painting her as a crazed and jealous wife who was bitter over her husband's affairs. Justin coerced Jubilee to give him the knife, and after she does, Justin is attacked by Samantha's ally Victor Stuart, who was still under the impression that Justin was preparing to kill Samantha himself. Jubilee assaulted Victor, but was later taken down and beaten up by Samantha. After her defeat, Jubilee was arrested for the murders. 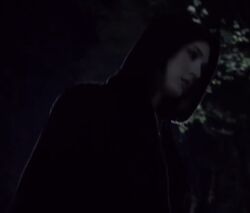 Jubilee in her hooded disguise 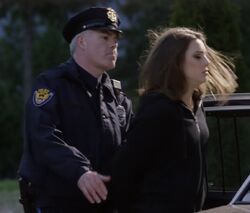 Jubilee's arrest
Add a photo to this gallery
Retrieved from "https://femalevillains.fandom.com/wiki/Jubilee_Swan_(Deadly_Sorority)?oldid=145103"
Community content is available under CC-BY-SA unless otherwise noted.