Start a Wiki
watch 00:17
The Loop (TV)
Do you like this video?
Josephine is a henchwoman to the arch villain Little Napoleon in Batman.

Batman and Robin in the Batmobile pursue the van in which the "Counterfeit Corsican" and his henchwoman are fleeing. After a hairbreadth escape, when Little Napoleon dynamites a bridge, the villain "inexplicably" sends a toy plane to give the dynamic duo a clue about where his hideout is.

Batman and Robin rush to the unfinished and "abandoned" Gotham Recording Company building; in a  wooden hut right at the top is Little Napoleon's hideout. Naturally, the clue Little Napoleon gave them was a means of drawing Batman and Robin into a trap. On entering the hideout the duo discover they are standing on a trapdoor which can open to send them plunging 12 stories to their deaths, while Little Napoeon's two thugs point rifles at them. The gleeful arch crook mockingly asks Batman and Robin to make a choice of demise, to fall through the trapdoor or take bullets from his henchmen. But the fast acting duo jump sideways as the trapdoor opens below them, dodging the gunfire from the hoods. Batman trips one of the villain's men who plunges down the trapdoor, then he grabs the other henchman and throws him down as well. Robin is stunned at this perceived ruthlessness and thinks Batman has gone mad. Little Napoleon and Josephine are now horrified and terrified; Batman grabs the criminal pair, dropping them down the trapdoor as well. But Batman informs Robin that he'd had the police spread a net at the bottom of the building and the crooks are quite safe.

Josephine's character and role in the story -

Josephine is greedy and pretty ruthless - as well as being a very active henchwoman. Among other things she delivers a phony bomb to Commissioner Gordon, decoys the dynamic duo by posing as an old woman, helps Little Napoleon escape, and drives the getaway van.

Josephine is a slim, beautiful blonde, aged 22 (she says her age at one point!). She wears a majorette type outfit with a short skirt and hat.

The newspaper strip Batman was created as a tie in with the (initially) very popular live action TV series which ran on the ABC network from 1966 to 1968. It has a similar "campy" style. A number of newly created villains appeared in the stories (Little Napoleon, The Collector, Jolly Roger, Blue Max,  Pretty Boy Floy, Madame Zodiac...) as well as established ones (Penguin, Joker, Poison Ivy, Catwoman) - most having henchwomen. 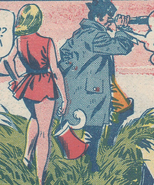 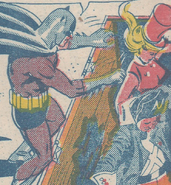 Josephine 5
Add a photo to this gallery
Retrieved from "https://femalevillains.fandom.com/wiki/Josephine_(Batman)?oldid=160600"
Community content is available under CC-BY-SA unless otherwise noted.