Start a Wiki
watch 01:51
The Loop (TV)
Do you like this video?
Joggernaut’s Henchwomen are villainesses from the cartoon Plastic Man, they appear in the 1979 episode Joggernaut. Plastic Man is a segmented show from the animated series The Plastic Man Comedy Adventure Show.

The henchwoman with the darker hair is called Ima, but the other woman is never named. Both of the evil women dress in short skirts and boots, and they both loyally help the villain Joggernaut with his evil plans. Joggernaut wants to steal an energy machine that when used can help him find the Amazon City of Gold, and the treasure that lies within.

They are first shown fanning Joggernaut, who talks about what he plans to do to Plastic Man if they cross paths. Ima says she loves it when Joggernaut gets mad. The villains head out to the river to ambush a boat carrying the heroes and the professor who invented the energy machine, as well as the machine itself. Joggernaut and his henchwomen swing towards the boat to kidnap the professor and steal his machine, but they are knocked back by Plastic Man. They try a second time, with Joggernaut this time being launched as a cannonball and taking out Plastic Man. His evil henchgirls take this opportunity to tie up Plastic Man’s friends and kidnap the professor.

Joggernaut and his henchwomen eventually make the professor tell them how the machine works and then visit the Amazon City of Gold to steal the treasure, before returning to their hideout. Plastic Man and his friends follow them back to their hideout, and his friends steal the machine back from Joggernaut. The henchwomen jump out of the window after the heroes and land on a kind of trampoline that launches the heroes up into the air and then back down onto the trampoline. This then causes the henchwomen to launch upwards into the air, and as they fall back down the heroes use the trampoline as a trap to capture the villainesses inside. Joggernaut is then dealt with by Plastic Man and the three villains presumably end up facing some kind of justice after being captured, but this is never shown or confirmed. 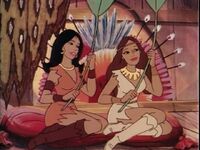 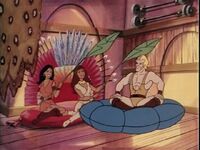 ...as he explains what he'll do if he gets his hands on Plastic Man... 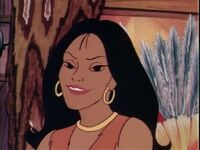 ...much to Ima's delight. She loves it when he gets mad 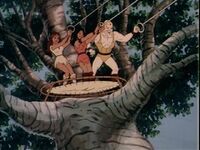 The villains plan an aerial attack on the heroes... 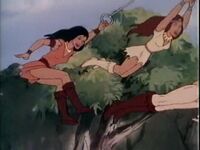 ...they swing through the jungle... 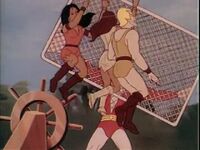 ...but are seen and knocked back by Plastic Man... 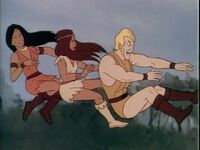 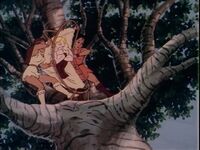 The henchwomen try again and launch Joggernaut as a cannonball...

...then bind two heroes and kidnap the professor 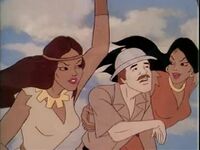 The professor has been kidnapped by the evil women 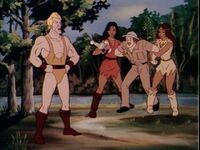 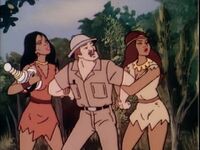 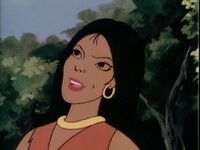 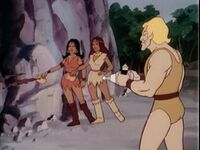 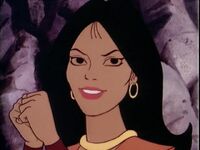 Ima grins at their success 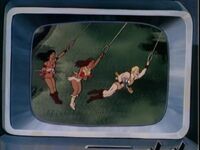 The villains head home with the stolen loot

The evil henchwomen are captured
Add a photo to this gallery
Retrieved from "https://femalevillains.fandom.com/wiki/Joggernaut%E2%80%99s_Henchwomen_(Plastic_Man)?oldid=104538"
Community content is available under CC-BY-SA unless otherwise noted.