Jody Keller (Cheryl Ladd) was a hidden villainess from the original Satan's School for Girls TV film (airdate September 19, 1973. She was a student at the Salem Academy for Women, and she was part of a trio of students who welcomed main protagonist Elizabeth Sayers to the school; a trio that included fellow students Roberta Lockhart and Debbie Jones.

Jody turned heel later in the film, when she was shown as part of a sextet of girls who participated in killing Professor Delacroix; beating him with sticks after he falls in a swamp. In the climax, the evil Jody appeared with the rest of the girls as they, along with Roberta, are revealed as followers of a Satanic cult, led by Dr. Joseph Clampett--who they believe is Satan incarnate. Jody (along with the other followers) perished in a fire set by Clampett inside the cellar, doing so as part of a sacrifice. 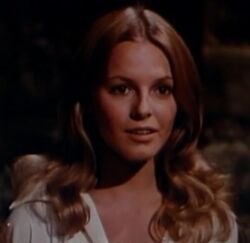 Jody Keller revealed as a Satanic follower
Add a photo to this gallery
Retrieved from "https://femalevillains.fandom.com/wiki/Jody_Keller_(Satan%27s_School_For_Girls_1973)?oldid=188685"
Community content is available under CC-BY-SA unless otherwise noted.