Joanne McKay is a nurse at a mental hospital, where her son, Adam Trent, is a patient. It was revealed that Joanne engaged in an abusive and incestuous relationship with Adam for years; in fact, after Adam cut off all communication from Joanne, the villainess took the nursing job to continue her twisted relationship with Adam. When Joanne found out that Adam was in a relationship with fellow patient Robbie Garson, she urged Adam to end it. After Adam refused, Joanne took matters in to her own hands.

Joanne went into Robbie's room and noticed a photo of a child posted to the wall, and she told him to bring it with him in their next meeting. She did this knowing that personal items weren't allowed, and she enforced that rule to Robbie and attempted to retrieve the photo, resulting in Robbie throwing a fit and needing to be restrained and sent back to his room. Later that night, Joanne appeared in Robbie's room and smothered him with a pillow. Her crime was covered up by Adam, who bludgeoned Robbie's head on the floor. After the CSI crew put all the pieces together, Joanne was interrogated by Sara and Brass, and later arrested for incest and murder. 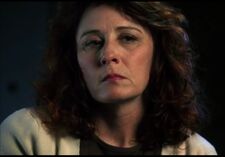 Add a photo to this gallery
Retrieved from "https://femalevillains.fandom.com/wiki/Joanne_McKay_(CSI)?oldid=201798"
Community content is available under CC-BY-SA unless otherwise noted.