The Female Villains Wiki
Register
Don't have an account?
Sign In
Advertisement
in: 2010s, A Taste Of Her Own Medicine, Adulteress,
and 15 more 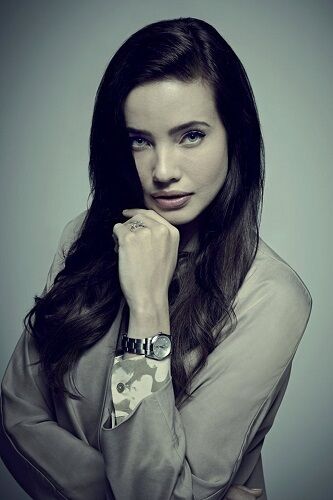 Joanna Wellick (Stephanie Corneliussen) is one of the main villains of the Mr Robot series. She is the ambitious wife of Tyrell Wellick with whom she has a son. She understands and supports Tyrell's lust for power. Tyrell is obsessed with getting the CTO position at Ecorp. She even accepts the fact that he sleeps with other people to achieve this goal. When Tyrell loses the opportunity to become a CTO, Joanna makes him understand that he is no longer welcome in their family if he can't find a way to get them out of this situation.

Joanna Wellick supported her husband from the moment Terry Colby was arrested so he could get the CTO position at Ecorp. When Tyrell Wellick, her husband, learned that Scott Knowles could get the job instead of her, Joanna advised him to be wary of him and helped him seduce his wife by occupying Scott in the living room while Tyrell broke into the bathroom of their house, where Scott's wife, Sharon, had retired. But that strategy failed. However, Joanna advises Tyrell to persevere and reminds him that she had warned him of their dangerousness, but that they now know what Sharon wants. To be wanted.

At a reception at Ecorp, she accompanies her husband and tells him to be "firm" before he seduces Sharon again. But Tyrell takes Sharon to the roof of Ecorp and strangles her to death. Joanna, not being immediately informed by Tyrell of the news, doesn't understand her husband's distress and asks him, coldly, not to abandon her and their future child. Joanna will learn of her husband's murder when two police investigators come to their home. They allow them to enter, but help her husband to flee the interrogation by hastening his delivery by deliberately injuring himself. She hasn't heard from Tyrell since.

She later meets Elliot in front of her house and covers for her husband, who is on the run. She also tries to get information from Elliot and threatens to kill him with her tongue.

Joanna seems throughout the show to be only interested in her husband's success, at one point she talks about the "hard work" they had to do to get to where they are now. And her threat to leave Tyrell if he can't fix his work situation shows how obsessed and desperate she is for success. A month later, Joanna's in a relationship with Derek, a bartender. Tyrell's still missing and the prime suspect in the 5/9 hack. Joanna meets Derek in secret, claims they can't be seen together. Joanna wants to find Tyrell. She's paying off the man who found his car. Joanna gets a gift at her door, a music box with a picture of an ultrasound and a hidden phone. She tries to negotiate with Scott Knowles, not to give her husband an alibi for Sharon Knowles' murder. Scott refuses to give anything to Tyrell's son. Joanna's now with Mr. Sutherland, the driver hired by Tyrell. When Kareem gets closer to the FBI, she has him killed. Joanna gets a phone call from someone breathing heavily, possibly Tyrell. She runs down the street, catches the attention of the paparazzi. An old woman splashes her with a bucket of red paint on the sidewalk. In July, Derek wants Joanna to come to his 30th birthday party, threatens to break up with her. She doesn't do it, but presents him with her divorce papers. On August 7th, Joanna waits outside Elliot's apartment the day he's released from prison. She takes him home and shows him the mystery phone. She asks him to trace the calls and sends Mr. Sutherland to an apartment. She puts her kid to bed and Sutherland comes back. Joanna says it's Tyrell's greatest gift. The next day, Joanna goes to Scott Knowles' apartment, finds him drunk. She confronts him about the fact that he called her. Scott reveals that his wife was pregnant, she tells him the day of the prom. Joanna insults his wife and the fetus, Scott tries to choke her and hits her. His rage quickly subsides and he calls for help. Later, Joanna's at Derek's apartment with her face badly bruised. She tells him that to get revenge on Scott, Derek has to frame him for the murder of Sharon Knowles. It turns out Derek was a bartender at the prom and that's where he met Joanna. Derek is more than willing to fight for her, but hesitant to change his story. Joanna gives an interview on national television proclaiming Scott Knowles' guilt in the murder of his wife Sharon, coupled with Derek's testimony implicating Scott. As she is brought home by Mr. Sutherland, Sutherland notices a car driven by Derek following them. Sutherland stops and confronts Derek, telling him that he will never try to contact Joanna again. As Sutherland gets in the car, Derek shoots him. Joanna tries to get Sutherland's gun for protection, but she's shot by Derek, splashing her son. Sutherland regains consciousness and shoots Derek.