Start a Wiki
watch 01:51
The Loop (TV)
Do you like this video?
Joan Gastroux was the main villainess from Blood on Her Lips, a story from the January 1953 issue of Journey Into Fear.

The story had Royal Northwest Mounted Police Officer Dennis Keefe writing a diary about his pursuit of Pierre Le Gan, a trapper who was wanted for murder. However, when Keefe found Le Gan, he was mauled to death by a pack of wolves. It was after this that Keefe encountered Joan, and she took him to her cabin nearby--a cabin she claimed to have been living in since the passing of her father. While dining, Keefe had suspected that Joan was lying about the claim, and it was at that moment that he began dozing off while Joan was next to the window

Shortly afterwards, Joan turned heel when she began howling and revealed herself as a werewolf, while confirming Keefe's suspicions that she drugged his coffee. The villainess revealed her fangs as she howled and called out to her fellow wolves, and after hearing the howls from the villainous femme fatale, Keefe spotted her and realized that not only is Joan a werewolf, but she and the other wolves killed Le Gan. Keefe charged at Joan with a rifle, only for his shots to fail to take down Joan.

Quickly realizing that silver bullets would take down and kill a werewolf, Keefe removed his silver buttons from his uniform and loaded his gun with them. He later fired the shots at Joan, killing her instantly. Once she was killed by Keefe, the evil Joan shifted into her true form:  a gray wolf. 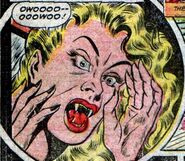 Joan's heel turn and reveal as a werewolf

The evil Joan being confronted by Keefe

Joan's defeat and demise
Add a photo to this gallery
Retrieved from "https://femalevillains.fandom.com/wiki/Joan_Gastroux_(Blood_on_Her_Lips)?oldid=100575"
Community content is available under CC-BY-SA unless otherwise noted.