Start a Wiki
watch 01:39
The Loop (TV)
Do you like this video?
Joan (Amanda Anka) was a villainess from episode 8.20 of Diagnosis Murder, "Deadly Mirage, Part 1" (alternately titled, "Deja Vous"; airdate May 4, 2001). She was a former security guard at Community General, and before the episode's events, she colluded with Frederick Wilson to murder his former cohort, Lou Tyler. Tyler had conspired with Frederick to murder his sister, Lily Wilson, but cut a deal in exchange for her testimony.

Joan entered the courthouse in a red-haired wig and posed as a woman on a wheelchair, only to go into the restroom and load her silencer. Later on, the evil Joan resurfaced and shot Tyler to death. As onlookers surrounded the scene, Joan made her escape, ditching her wig and making a clean getaway. Joan was last shown meeting Frederick, who handed her heroin and showed his appreciation for her deed. She was later found dead of an overdose. 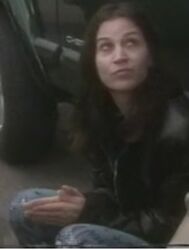 Joan out of her disguise
Add a photo to this gallery
Retrieved from "https://femalevillains.fandom.com/wiki/Joan_(Diagnosis_Murder_8.20)?oldid=206051"
Community content is available under CC-BY-SA unless otherwise noted.