Start a Wiki
watch 01:48
The Loop (TV)
Do you like this video?
Jo Gage (Martha Plimpton) is the hidden main villainess from Law & Order: Criminal Intent's sixth season opener, "Blind Spot" (airdate September 19, 2006). She is the daughter of criminal profiler Declan Gage, and the childhood friend of her father's protege, Detective Robert Goren.

Jo's backstory revealed that her childhood was not a happy one; for one, Declan wanted a son, not a daughter, leading to years of neglect. Her mother committed suicide when Jo was only seven, and to become close to her father, Jo let Declan teach her all about serial killers and how they operate. However, when it came to the subject of boys, Jo was never taught about that by Declan. All she learned was about serial killers and their crimes, with Declan teaching her the belief that women could never become serial killers. Declan's statement about female serial killers stuck in Jo's mind, and she decided to become one herself to not only prove him wrong, but get her father's attention.

Dressed in a hooded disguise, the evil Jo entered the home of a woman named Heidi Conington, attacking and abducting Heidi before killing her. Heidi's ex-boyfriend, Enrique Zuella, was accused of the murder, but he was cleared after Jo did the same to her roommate, Jenna Shea. Jo was introduced in the episode after Declan appeared as a consultant to the case, as he suspected that the murders were committed by a serial killer named Sebastian, who used the same M.O.:  tying up the victims and gagging them with duct tape before killing them. Seeing her father led Jo to believe that her plan was working and that Declan would notice her, but after seeing that he was spending more time with Goren than with her, the deranged villainess decided go to after another victim:  Goren's partner, Alexandra Eames.

Eames entered her home and saw that her birdcage was empty, and it was at that moment that she was knocked out by Jo and taken to an abandoned warehouse, where Jo had another victim tied up in another room. Jo later sent a text message to Goren regarding Eames, doing so under the Sebastian name, though Jo's true plan was to frame her father, as she left her weapons of choice in Declan's trunk. Declan was under intense suspicion even after Eames escaped, and the episode's final scenes had Goren and Jo watching Declan's interrogation. The two of them began chatting and bringing up Jo's upbringing, with Jo revealing that Declan wanted a boy and that she learned everything about serial killers from him.

It was after the subject of female serial killers was brought up that Jo's reveal as a villainess occurred, as she unabashedly confessed to the murders and the attempt on Eames. She stated that she wanted her father's attention and that she took Eames because Declan was spending all his time with Goren. As Jo was taken away and arrested, she told Goren to tell Declan everything. A later episode, "Frame," revealed that Jo was placed in an asylum, and was placed in a coma after biting off her tongue, doing so because she never wanted to see Declan again.

Jo attacking Eames in her home 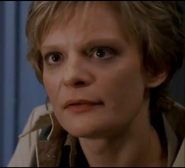 Jo during her reveal
Add a photo to this gallery
Retrieved from "https://femalevillains.fandom.com/wiki/Jo_Gage_(Law_%26_Order:_Criminal_Intent)?oldid=127026"
Community content is available under CC-BY-SA unless otherwise noted.