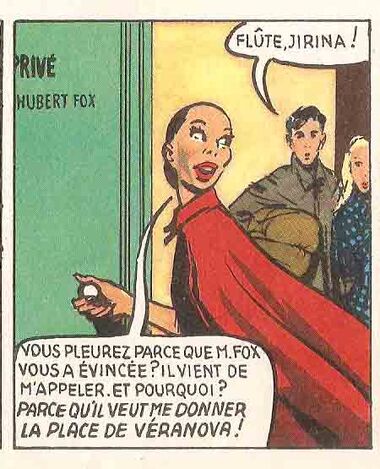 Jirina is a ballerina, who was found in the street by the great ballerina Veranova. Veranaova helped her, and had her hired in the ballet. They are both best friends now, or so it seems.

But Jirina is secretly jealous of Veranova, and wants to take her place in the ballet, so she has her henchmen trying to intimidate Veranova, with anonymous threatening letters, so that she quits the ballet, and trying to kidnap her. But Belle, the heroine, helps Veranova, encourages her not to quit. Since she learned that Veranova has a hidden baby, she plots to kinap the child.
Belle, the heroine of the comics, found out about Jirina's plan, but Jirina's henchman grabs her, and she is left tied up in a closet.

As Jirina tries to kidnap Veranov'a child, she ultimately finds out that she has been tricked, since the baby has been replaced by a teddy bear.

After she is exposed, Jirina is banished from the theatre, never to return. 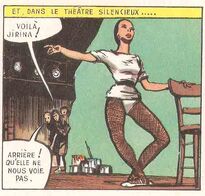 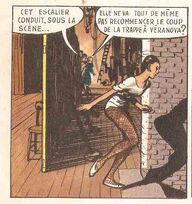 Add a photo to this gallery
Retrieved from "https://femalevillains.fandom.com/wiki/Jirina_(Belle_du_ballet)?oldid=193566"
Community content is available under CC-BY-SA unless otherwise noted.