Jillian Havemeyer (Janel Parrish) is a minor villainess from "The Mystery of the Crooked Clubber", episode 1.20 of The Mysteries of Laura (airdate May 6, 2015).

Jillian Havemeyer was a wealthy Manhattan socialite and the girlfriend of Zach Hill, who worked for a drug dealer in order to finance his partying lifestyle. When Zach was murdered, Jillian appeared heartbroken when questioned by detective Laura Diamond and revealed Zach's illegal activities. But she adamantly disbelieved the theory that Zach was part of a crew of robbers targeting jewelry stores in the Diamond District, where he had a job as security.

After deducing the gang's next target, Laura and her team of detectives set up a stakeout of the store, with Meredith Bose and Frankie Pulaski going undercover as cashiers. The two-person crew soon arrived and were quickly subdued after briefly taking a customer hostage. When Laura came in, she unmasked both the robbers--and was surprised to discover that Jillian was one of the culprits.

Jillian and her male partner, D.B., were brought in for questioning, where Jillian confessed that she had become hooked on the thrill of stealing and had started out shoplifting before forming her criminal partnership with D.B. When Meredith pointed out how Jillian was willing to keep robbing the stores even after Zach's death, Jillian claimed that D.B. had forced her to go along with their latest heist despite her resistance. Jillian was briefly suspected of killing Zach to keep him quiet about her and D.B.'s crimes, but both robbers denied the accusation and asked for attorneys. While they were both eventually cleared for Zach's murder, Jillian and D.B. were both arrested for their robbery spree.

Jillian in her villainous disguise 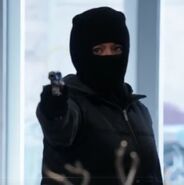 Jillian's scowl after her reveal 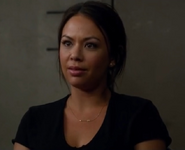 Jillian during her interrogation
Add a photo to this gallery
Retrieved from "https://femalevillains.fandom.com/wiki/Jillian_Havemeyer_(The_Mysteries_of_Laura)?oldid=159345"
Community content is available under CC-BY-SA unless otherwise noted.