Start a Wiki
watch 01:48
The Loop (TV)
Do you like this video?
Jill Goddard (Lisa Pelikan) is the hidden main villainess from "Prediction:  Murder," episode 5.08 of Murder, She Wrote (airdate January 1, 1989). She is the wife of Del Goddard and the daughter-in-law of real estate magnate Lee Goddard.

Jill's personality was established early in the episode, as she was a superstitious astrology enthusiast, which astounded Lee. At a gathering, a psychic going under the name, Francesco, entertains the guests with his abilities, but when his attention turns to Jill, he predicts that her throat will constrict after a moment of happiness, but a friend will save her. He also predicted a fall from a carousel, followed by a fiery death. Francesco's predictions begin to come true for Jill when she suddenly chokes on a piece of toast, but is saved by Jessica Fletcher, and later on, Jill falls off her horse. Convinced of Francesco's predictions, Jill begs Del to call Francesco with hopes to avoid a fiery death, and leaves under the claim that she was visiting Del's friend, Katherine Aaron.

When Katherine appears at the home looking for Jill, the others suspect something is amiss. It was at that moment that the group received an ominous phone call stating that Jill had been abducted for ransom, with the demand being $1 million. After the payment, Jill calls from a nearby gas station and confirms her safety, only to be killed when her car went over a cliff. Francesco, whose real name is revealed to be Leonard Stiegler--was suspected in Jill's murder (the brakes were revealed to be tampered with), only to deny killing her. He also revealed that Del hired him to coerce Jill to leave him, as he had felt his marriage was a mistake. However, everything was revealed when Jessica showed Jill's planner to Lt. Turner, which said "Psychic Seminar" and what she believed was "Go to dentist." Jessica concluded that the latter was actually "G.O." to dentist, with the initials standing for Greta Olsen, the housekeeper who was planning to go back to her native Sweden.

Jessica told Turner to release Francesco, who is found at the airport with his wife, only for Jessica and Turner to appear and reveal the "wife" as none other than Jill Goddard, the mastermind of the murderous and greedy scheme, with Francesco as her accomplice (and suggested lover). As Jessica revealed to Lee at the end of the episode, the villainess cooked up the scheme knowing her marriage to Del was failing, and she had Francesco give his true predictions as part of their plan. While Francesco was at the Goddard home, Jill faked her disappearance and played the recording demanding the ransom, and regarding Greta, the evil Jill took her to the dentist so she could switch their dental records, making the switch after Jill killed Greta. Both Jill and Francesco ended up arrested (off-screen) for their scheme. 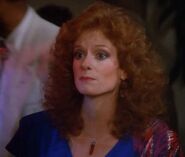 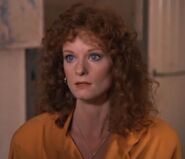 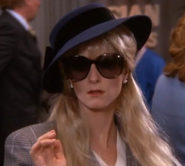 Jill in her disguise, confirming her reveal
Add a photo to this gallery
Retrieved from "https://femalevillains.fandom.com/wiki/Jill_Goddard_(Murder,_She_Wrote)?oldid=135302"
Community content is available under CC-BY-SA unless otherwise noted.