Start a Wiki
watch 01:50
The Loop (TV)
Do you like this video?
Jezebel (Paulette Goddard) is the wicked queen in the 1953 Biblical film "Sins of Jezebel".

In the 9th century BC Israel, the prophet Elijah (John Hoyt) advises King Ahab (Eduard Franz) not to marry Jezebel, an idolatrous princess of Phoenicia.  Ahab sends for Jezebel despite these warnings, and commands Jehu (George Nader), his captain, to escort her caravan safely to Jezreel.

Once Jehu meets Jezebel, he immediately becomes attracted to her and she confuses him for Ahab.

Jezebel finally arrives at Jezreel and is greeted by Ahab who, stunned by her beauty, provides her with an individual chamber until they marry.  On her wedding night, Jezebel evades Ahab and pursues Jehu, whom she seduces.

Jezebel establishes the cult of Baal, her idol, in Israel and builds a temple.  Jehovah, the God of the Israelites, delivers drought upon Israel because of the idolatry and sends his prophet Elijah to reprimand the people.  Elijah prays to Jehovah and the drought ends.  Jezebel orders a series of executions against all those who protest her worship of a multitude of gods.

Jezebel challenges Elijah to a contest between himself and the priests of Baal to bring rain.  Elijah prophesizes that Jezebel will be eaten by dogs.  Events come rapidly to a head as the terrible prophecy concerning Jezebel inevitably arrives.

A military coup takes place to take back Israel from the Baal god.  In the end, Jezebel is shot in the chest with an arrow by a soldier when she steps out onto the balcony of her palace.  Another soldier then throws her body off of the balcony into the courtyard below.  Her body is run over by a chariot and then consumed by dogs, which makes the prophecy come true. 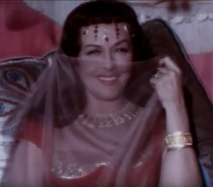 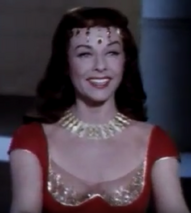 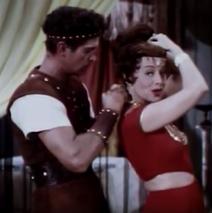 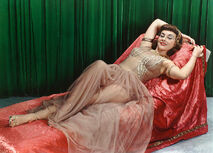 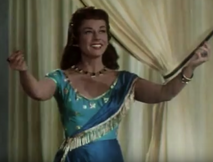 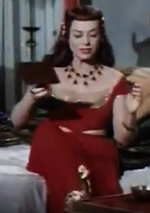 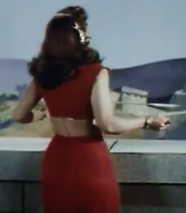 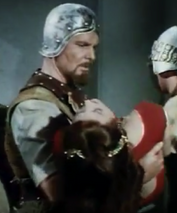 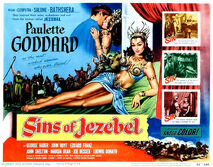 Add a photo to this gallery
Retrieved from "https://femalevillains.fandom.com/wiki/Jezebel_(Sins_of_Jezebel)?oldid=116874"
Community content is available under CC-BY-SA unless otherwise noted.