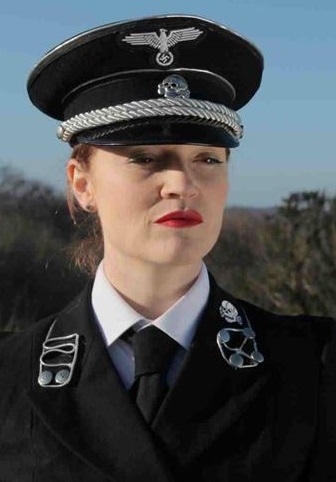 Jezebel (Tina Barnes) is the main antagonist of the movie "Battlefield Death Tales" aka "Angry Nazi Zombies" (2012), three interlocking stories from the dark days of World War 2. She is a woman as dangerous as she is sadistic who does not hesitate to kill and torture all her enemies. In the film, she intercepts the hero who, despite his job actually being to write condolence letters for the war, is sent by his superior to go looking behind enemy lines for his daughter. Aided by a cyborg prototype, Jezebel does not hesitate to shoot the young woman rescued by our hero, leaving her for dead. So she interrogates and tortures the hero, extracting information from him. But the clever young man ends up taking advantage of a moment of distraction, to make the sadistic bitch swallow a pill that literally destroys you from the inside. Jezebel writhes in pain as the poison rips his guts out. She still tries to kill the hero, escorted by her attack cyborg, but in the end the suffering wins out. In a last spasm she collapses to the ground, her face tense and bloody. Throwing a last raging glance in the direction of the hero who is already joining his sweetheart, her well-deserved torture ends with her last breath.

Don't you want to talk?

Add a photo to this gallery
Retrieved from "https://femalevillains.fandom.com/wiki/Jezebel_(Battlefield_Death_Tales)?oldid=192910"
Community content is available under CC-BY-SA unless otherwise noted.