Jessie's backstory revealed that she was the high school sweetheart of Jake, the husband of the film's main protagonist, Sarah. Feeling that Sarah stole Jake from her, Jessie became bitter and jealous of Sarah, to the point where she abducted Sarah's young son, Matt, while the family was at the beach. The deranged villainess raised Matt as her own for years, all the while plotting a scheme to get money from Sarah

After killing Jake in her car out of revenge, the evil Jessie sent her nephew, Jonathan, to pose as Matt, while masking her villainous demeanor by acting as a friend for Sarah. She later encountered Jake's sister, Karen, who recognized her and reminded her of Sarah and Jake, leading to Jessie smothering Karen to death. Jessie's scheme works and Jonathan is welcomed by Sarah, though Ian (Matt's older brother) wasn't convinced and had his suspicions, even after a DNA test proved he was Matt. This led to Jonathan tampering with the brakes in Ian's car, which resulted in Ian getting into an accident, which he survived.

Sarah became suspicious herself when the phone number to Ann Reynolds (who helped Sarah regarding Matt; actually Jessie using a fake name), received no answer when dialing, and it was after this that Sarah informed "Matt" that another DNA test was acquired. Meanwhile, Rachel, Ian's wife, drove to what turned out to be Jessie's home on her on investigation, only to end up drugged and tied up by the crazed Jessie. Jonathan drove to the home, unaware that Sarah was in the back, and it was there that they met up and Matt was shown in the home, revealing Jessie as his kidnapper.

Jessie sent Jonathan to acquire more of Matt's DNA so he could pose as Matt and gain money from Sarah, but after Sarah was caught looking at the two of them through the window, she ended up chased by Jessie--who fired her gun at Sarah. After Sarah introduced herself to the real Matt as his mother, Jessie appeared and held Sarah at gunpoint. Regarding her motive, Jessie voiced her bitterness at Sarah for (in her mind) stealing Jake from her, and stated that she was a better "mother" for Matt than Sarah was. The villainess also stated her need for Sarah's money to keep the house, and after both sides fought, Matt picked up the gun and pointed it at Jessie, intending on killing her for kidnapping him years ago. Sarah managed to talk Matt down and take the gun, only to fire a non-fatal shot at Jessie's shoulder, while warning her to stay away from Matt. Afterwards, Jessie was shown on a stretcher while being taken into police custody. 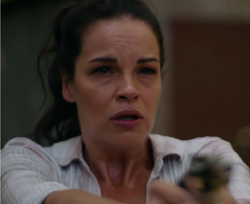 Add a photo to this gallery
Retrieved from "https://femalevillains.fandom.com/wiki/Jessica_Parker_(The_Wrong_Son)?oldid=181433"
Community content is available under CC-BY-SA unless otherwise noted.