Jessica Hogan is the older sister of Bree Hogan, who was adopted by Jessica's parents when Bree was only a day old. Their parents did their best to raise Bree like she was their own, and as time passed, Jessica became insanely jealous of her adoptive sister to the point where she accused her parents of loving Bree more than her. Her various outbursts resulted in Jessica becoming institutionalized, only to be released.

After her release, Jessica decided to seek out Bree's birth mother, Laura Parker, and pose as Bree in order to receive the love and attention she felt she was denied. Before the events, however, Jessica found Laura's parents, Eleanor and Arthur Bishop, and killed them via carbon monoxide poisoning, making the deaths look like a suicide. In her first appearance, Jessica appeared to Laura asking for the Andersons' household, before returning and introducing herself as Bree, Laura's biological daughter. As Bree, Jessica was won over by Laura, her husband Michael Parker, and their daughter Skyler (the film's true main protagonist), especially after Jessica stood up to Chloe LoPresti at school, after Chloe bullied Skyler and accused her of seeing her boyfriend.

Michael began to become suspicious of "Bree," and voiced his suspicions to his assistant Gareth Drury, who looked into Bree. At a gathering at the Parker home, Gareth confronted Jessica and informed her that he knew she was lying, adding that he would give her a chance to come clean. Instead, the evil Jessica bludgeoned Gareth to death with a rock, and later placed his body inside a shed. The villainess overheard Detectives Holmes and Banks discuss the deaths of the Bishops, revealing that they were murdered, leaving Jessica worried that her secret would be revealed. Later on, Jessica continued to bond with Skyler as Bree, telling her that her "adoptive" parents raised her well and it angered her sister to the point that she was institutionalized.

Skyler became suspicious of her new sister, leading her to head to the Hogans' home to see if Bree was for real. Meanwhile, Jessica spotted Detective Holmes searching the house and stabbed him to death with a gardening shovel, and during Skyler's visit, she was assured that Bree's backstory and the story about Jessica was true, but when she saw Bree return home, Skyler was shocked to see that she looked nothing like the girl living at the Parker house. This marked the official reveal that the woman posing as Bree was actually the psychotic Jessica, who knocked out Laura with a vase after killing Holmes.

The deranged villainess tied Laura to a chair, and afterwards, she revealed that she was not Bree, but her sister Jessica. She went on a rant accusing her parents of loving the real Bree more than her, and she went to Laura because she wanted to know what it was like to have a loving mother. In addition, Jessica revealed that she killed Laura's parents because they made Laura give up Bree, accusing the Bishops of ruining her own life and lambasting Laura for having Bree in the first place. Just as she was set on killing Laura, Skyler arrived and stated to Jessica that she had been to the Hogans' home, after which the pair brawled. The demented Jessica had her hands wrapped around Skyler's throat, only for Laura--who was freed by Skyler--to knock her out with a punch to the face. Banks arrived and arrested Jessica, who began breaking down in a rage and screamed for Laura to help her, only for Laura to demand Banks get Jessica out of here, proving that Laura will never accept Jessica as a daughter, thus permanently shattering Jessica's goal.

The final scenes showed Jessica back at the mental institution, where a group meeting took place. She was shown near a window holding a photo of her real family (while scratching off Bree's photo), ignoring the doctor's calls to Jessica before answering to Bree. The delusional villainess stated that the Parkers didn't understand her, but she vowed that the next one would. 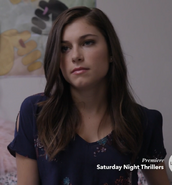 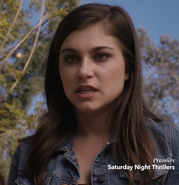 Jessica becoming suspicious after revealed her true identity to Laura 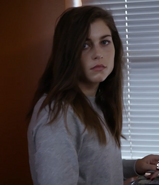 Jessica in a mental institution

Retrieved from "https://femalevillains.fandom.com/wiki/Jessica_Hogan_(A_Daughter%27s_Deception)?oldid=215328"
Community content is available under CC-BY-SA unless otherwise noted.