Jess was an environmental scientist working for technology company Meteor Systems, and was working in The Wastes to help the company revive the experiments of deceased scientist Albert Tesla. She also worked alongside fellow Meteor employee David Rosenberg, but prior to the case's events, Jess learned via a mind reading report made by Dr. Trevor Neuman that David intended to stop the company's mad plans by killing the scientists before their work could be done.

Wanting to stop David from ending the experiments, the evil Jess attacked David with a bat, knocking him out and killing him by throwing him into a puddle of nuclear waste. Jess later informed Karen Knight (Meteor's former CEO and current fugitive) about her murderous deed, with Karen congratulating Jess on neutralizing David as a threat. When questioned by the player and Amy Young about David, Jess claimed that he had never worked with her and that she was too wrapped up in her work to socialize.

Ultimately, though, the crime scene evidence pointed to Jess's guilt and the detectives confronted her at her lab. After initially trying to claim that David's death was a result of the nuclear storm hitting The Wastes, Jess confessed to murdering David, claiming that she had done so in self-defense after concluding that his mind reading results proved that he planned to kill the Meteor researchers to stop them from finishing Tesla's experiments. Jess also boldly refused to give any information as to Karen's whereabouts, stating that her project was complete now that David was no longer a threat. At her trial, Jess continued to claim her crime was in self-defense, with judge Edward Dante admonishing Jess for killing someone for science before sentencing her to twenty years in prison. At that, the villainous scientist maliciously proclaimed that soon, everyone would see what Meteor Systems had accomplished. 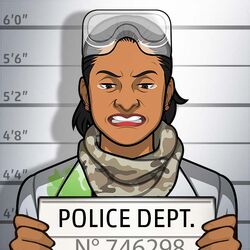 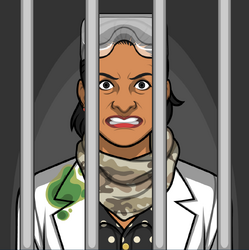 Add a photo to this gallery
Retrieved from "https://femalevillains.fandom.com/wiki/Jess_Prakti_(Criminal_Case)?oldid=146675"
Community content is available under CC-BY-SA unless otherwise noted.