Start a Wiki
watch 01:48
The Loop (TV)
Do you like this video?
Jeri Drumbeater (Vivian Wu) is the main villainess from "Comes the Dawn," episode 6.13 of Tales From the Crypt (airdate January 11, 1995). She was introduced as an Alaskan hunting guide, known for not being concerned with hunting law. As revealed by bartender Mona (Jeri's ex-girlfriend), Jeri was even game warden before Mona reported her for fishing with dynamite.

The episode's events had hunters Colonel Parker and Sergeant Burrows seeking out a guide for their illegal hunting endeavor of killing a grizzly bear, learning about Jeri after arriving at Mona's bar. After telling them about Jeri, Mona was seemingly shot and killed by Parker for attempting to call the police on them, with the men later meeting with Jeri at her home; with Parker being surprised to learn that Jeri was a woman.

Upon being offered $100 for helping the men hunt a grizzly, Jeri initially stated that she wasn't a poacher anymore, but quickly came to agree to help Parker and Burrows after the former took notice of Jeri having earned a Purple Heart for serving in Desert Storm, with Jeri (who was wounded during the battle) giving respect to Parker for having given the order to bomb their enemy. Jeri led Parker and Burrows to an abandoned area popularized by grizzlies, later taking them to an abandoned weather station, stating that it had been boarded up after kids who snuck up to the station began to disappear. Parker subsequently had Burrows partner with Jeri in setting bear traps, with Burrows appearing irritated by Parker's apparent crush on Jeri.

While setting the traps, Jeri picked up that Burrows' irritation was a result of him having a crush on her as well, informing her that she was "all his" if he wanted her and revealing herself as bisexual when Burrows asked her about Mona. Burrows ultimately turned Jeri down due to not being able to figure her out, with Jeri subsequently pinpointing that he and Parker were planning to sell parts of a grizzly bear on the black market and subtly attempting to goad Burrows into killing Parker so that she could become his new partner in poaching. But as Jeri finished her proposal by kissing Burrows, he revealed that Parker had been listening in the whole time, and Parker threw down a severed bear's head to reveal someone had beaten them to the kill.

Parker began to grill Jeri on her true intentions while Burrows threatened to shoot her, with Jeri angrily blasting the men before disappearing when they were distracted by howling. Parker and Burrows tracked the noise down to a room filled with bloody cocoons, and additionally discovered one of the aforementioned missing children transformed into a vampire. Shortly afterwards, as the cocoons began to hatch, Jeri came out and revealed herself as aligned with the vampiric creatures responsible for the surrounding town's disappearances. Additionally, Jeri revealed that she had targeted Parker and Burrows for personal revenge, as she revealed that during Desert Storm, Parker had shot Jeri, causing her to become undead, but unable to join the vampires due to her blood being poisonous to them. After shooting Parker in self-preservation, Burrows managed to flee despite stepping in a bear trap, later killing Mona when she appeared in her vampire form and tried to kill him.

Shortly afterwards, however, Jeri arrived at the front door and teasingly told Parker not to be afraid. When asked by Parker why the sun wasn't coming up, the evil Jeri boasted that in Alaska, the sun wouldn't rise in two months before letting her vampire gang inside. As the creatures swarmed Parker, the episode ended on Jeri watching sadistically as Parker was killed. 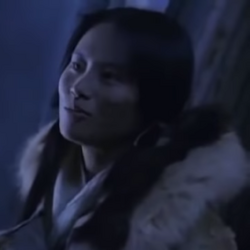 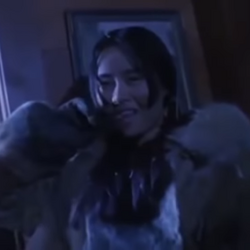 Jeri sadistically watching Parker being killed
Add a photo to this gallery
Retrieved from "https://femalevillains.fandom.com/wiki/Jeri_Drumbeater_(Tales_From_the_Crypt)?oldid=156764"
Community content is available under CC-BY-SA unless otherwise noted.