Start a Wiki
watch 01:48
The Loop (TV)
Do you like this video?
Jennifer "Jen" Anderson (Cerina Vincent) is the villainess of the 2018 film The Work Wife.

Jen was a junior copywriter for advertising firm Pepper & Muir, with her brief history revealing that she felt unloved by her father. As a result, Jen formed a habit for becoming obsessed with her superiors at Pepper & Muir, including one of the company's senior copywriters, Matt Belinson.

However, after Matt presumably rejected Jen's advances, Jen (disguised in a hoodie and leather gloves) broke into Matt's house as he was trying to find information about her and killed him, shooting him in the head. Jen then placed the gun in Matt's hand and told the local newspaper that Matt had been overcome with the pressures of working at the firm, staging his death as a suicide.

The film's events have Jen becoming the assistant for newly hired copywriter Sean Miller (the film's main protagonist), quickly developing an attraction to him as they begin work on a major contract for alcohol distribution GinTonic. Sean and Jen's partnership quickly became a friendship, with Sean confessing to Jen that his wife Lisa had previously suffered two miscarriages while Jen claimed her boyfriend (referring to Matt) had committed suicide. There was brief tension between the two, however, when Jen and Sean (unknowingly, in the latter's case) stole the concepts of fellow employee Ray, who angrily confronted the two after Sean presented his idea to Harper, the head of GinTonic.

Jen later met and befriended Lisa, inviting her to join the GinTonic project as their graphic designer. Later on, Sean opened up to Jen at the office after closing that he felt a strain in his marriage to Lisa, with Jen assuring Sean that he was a good husband and would make a great father someday, and later confessed to having a crush on Sean. When Sean reminded Jen he was married, Jen stated that it made him more attractive to her as she continued attempting to seduce him, only for Sean to brush off her flirtations and go home. Out of spite, Jen sabotaged Lisa's presentation to Harper, hacking the presentation and inserting a video she recorded of Lisa drunkenly criticizing GinTonic, causing Harper to briefly pull his contract with Pepper & Muir. Jen later sent Sean texts making it appear that they were having an affair, with Lisa becoming angry with Sean upon seeing them and further straining the Millers' marriage.

After his fight with Lisa, Sean confronts Jen after having her meet him at the office, with Sean telling Jen that he was certain she'd sabotaged Lisa's presentation and ordering her to leave his wife alone. Jen responded to Sean's claims that nothing was between them by accusing him of flirting with her and claimed his commitment to Lisa meant nothing due to him abandoning a contract he made with his former company to come to Pepper & Muir. After Sean left, Jen returned home in a fury, and later set fire to Sean and Lisa's house. After Sean arrived home from a hotel to comfort Lisa, Jen arrived to comfort the Millers, with Sean questioning Jen's claim that she had heard about the fire on the news and Lisa confronting Jen for her attempts to wreck her and Sean's marriage. Jen and Sean were later brought into the office of their boss Katie, who threatened to fire the pair if their conflict interfered with work again.

Lisa later accompanied Sean to a company party, with Jen approaching Lisa and apologizing for her behavior. However, it was then that Jen revealed how Sean opened up to her about her miscarriages, angering Lisa and causing her to confront Sean--with her outrage being broadcast to the entire party via the live microphone they were near. Lisa and Sean left after the former told Jen to stay away from Sean, and it was later on that Jen became drunk and bragged to her friends (off-screen) about setting fire to Sean and Lisa's house. Ray (also drunk) overheard Jen and left Sean a voicemail to warn him, later telling Jen that he was going to report her to Katie to have her fired. At that, the evil Jen shoved Ray down a set of stairs, killing him before leaving the party to steal Sean's cell phone from his house, allowing her to stop him from hearing Ray's message.

At the office, after Sean learned about Ray's demise, Jen met with Sean in his office, where he apologized for Lisa's outburst before Jen attempted to kiss him, once again proclaiming that she and Sean had more chemistry than him and Lisa and responding to Sean's refusals by claiming he'd already cheated on her by (in her mind) lusting after her. After blasting Jen as insane, Sean attempted to report her to Katie, only for his boss to disregard his complaints under the belief that Sean brought Jen's unwanted advances on himself.

Afterwards, Jen met Sean in a bar, attempting to appease Jen by apologizing for leading her on in any way and revealing that he intended to leave Pepper & Muir. At that, Jen again accused Sean of flirting with her and referring to him as weak. The villainess also went on to attempt to blackmail Sean into staying at the firm, threatening to accuse him of stealing Ray's notes and frame him for sending her threatening emails (having used his phone to do so) as well as destroy his marriage with Lisa under the delusional belief that it would make Sean want to be with her. Sean blasted Jen as pathetic before clearing his office, being watched by Jen along with Katie and co-worker Lena; both of whom had been turned against Sean by Jen's manipulations.

After looking Jen up online and learning about her past regarding Matt, Sean left to report Jen to the police, with the villainess arriving at the house and telling Lisa he and Sean had been having an affair, using an engraved pen she'd gifted Sean (which she claimed Sean gave to her) and forged emails and messages to strengthen her false claim. Sean arrived home and angrily ejected Jen from the house, who continued to stick to her and beg Sean to be with her. Despite Sean's assurances that nothing happened between him and Jen, Lisa remained unconvinced and stormed out of the house. It was shortly afterwards that Jen kidnapped Lisa, taking her back to the firm, tying her to a chair with duct tape before calling Sean to lure him back to the office.

As the two waited for Sean, Jen ranted to the bound and gagged Lisa that she knew she loved Sean despite her history of falling for her bosses and claiming he'd changed his mind about staying loyal to his wife. Jen then went to the bathroom to freshen up, tearfully telling herself that Sean was hers and that he would "understand" as she put on lipstick. Upon returning armed with a pistol, Jen found Lisa had freed herself from her restraints, with the women getting into a struggle that ended with Jen knocking Lisa out with a phone. When Sean arrived, Jen held him at gunpoint as she told him that she claimed she'd "made it easy" for Sean to be with her now, ordering him to kill Lisa or else she would kill them both and stage it as a murder-suicide. Sean briefly placated the psychotic villainess by claiming he was in love with Jen, only for her to snap at Sean when he tried to take the gun from her.

At that moment, Lisa awoke and attacked Lisa again, disarming her and leading to a struggle for the weapon between Jen and Sean. Jen eventually kicked Sean back and held the Millers at gunpoint, threatening to shoot them, only for Sean to grab for the weapon again. This caused the gun to fire and strike Jen, with Sean later revealing in a scene taking place eight months later that Jen survived being shot and was arrested for her crimes. The film's final scene saw an institutionalized Jen in a meeting with her therapist Dr. Larison, who was offering Jen a position working with him due to her past experience and the kindness she'd been showing her other patients. At the suggestion, Jen asked Dr. Larison if she could be his "work wife", with her pleased reaction to Dr. Larison's agreement confirming that Jen had become obsessed with Dr. Larison. 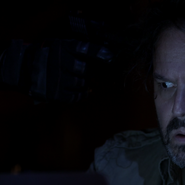 Jen's gloved hand as she prepared to kill Matt 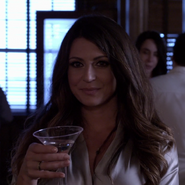 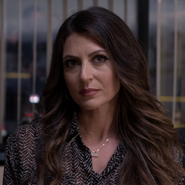 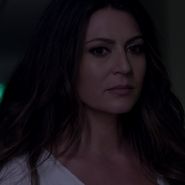 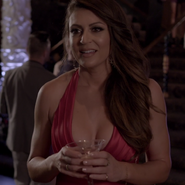 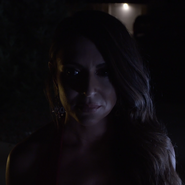 Jen with a captive Lisa 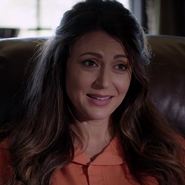 Add a photo to this gallery
Retrieved from "https://femalevillains.fandom.com/wiki/Jen_Anderson_(The_Work_Wife)?oldid=151735"
Community content is available under CC-BY-SA unless otherwise noted.