Jeanne Bonnet rides as a masked armed robber of a stagecoach headed for San Francisco. She runs a dance hall in town, where a man named Mallory shows up to complain about his girlfriend, Lu-Lu, working there and making too much money. Jeanne slaps Mallory, and her bouncers work him over. Lu-Lu comes down the stairs, telling Jeanne to stop. The two women get in a fight, which Jeanne wins hands-down. She fires Lu-Lu, but changes her mind when the woman begs Jeanne to keep her on. Jeanne does so, and decides to start a gang of masked hoodlums consisting of all women. Jeanne makes Lu-Lu the lieutenant of the feminine brood of criminals. She tells them to not speak more than necessary during crimes, so they aren't identified as female.

Jeanne goes to the frog marshes to meet Sam, a man who knows "everything going on around" the area. She finds Sam, who calls her the "little frog catcher". Sam tells her about a gold strike at a nearby mine.

Jeanne and the gang rob the mine. The night watchman tries to call the other miners, but Jeanne shoots him dead. The gang flees with its ill-gotten gains.

Later, the sheriff discovers the scene and investigates, discovering the murdered watchman and a woman's garter. The sheriff confronts Jeanne, but she says it'd be impossible for him to accuse her of killing the man. Lu-Lu and another of the gang looks on the conversation. Lu-Lu is prepared to kill the sheriff if necessary.

Jeanne returns to the frog marshes for more information from Sam. He tells her of a smuggling operation Dapper Dan is running to get foreigners brought to the coast. She sends Lu-Lu to confront Dan and force him to give her money. Dapper Dan recognizes the masked Lu-Lu is a woman, and nervous to boot. He slaps Lu-Lu and makes her drop the revolver, handing her over to the sheriff. Lu-Lu breaks down and confesses all, pointing the finger at Jeanne Bonnet. Jeanne overhears, shooting Lu-Lu through the jailhouse window. The sheriff is now certain he can prove Jeanne Bonnet is the bandit Two Gun Gal, firing at her disguised form as she rides off.

Sam walks into the dance hall as Mallory is demanding to see Lu-Lu, but has just overheard she was just killed by Jeanne. Sam tells Mallory that Jeanne has gone to hide out in the frog swamps. Mallory goes to confront her in the swamps, armed with a pistol. Mallory shoots the Two Gun Gal dead, revenging Lu-Lu, and the rest of her gang is brought to justice. No word on whether Mallory faced charges for killing Jeanne Bonnet. 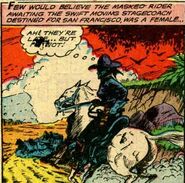 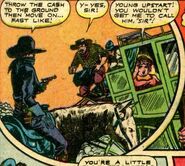 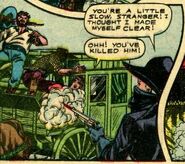 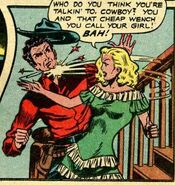 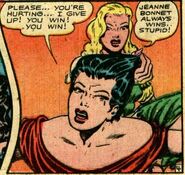 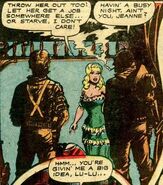 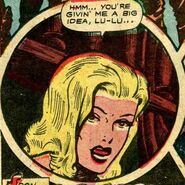 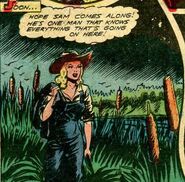 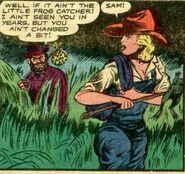 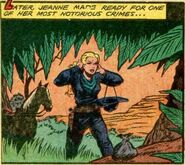 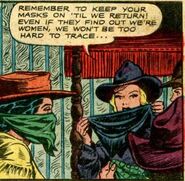 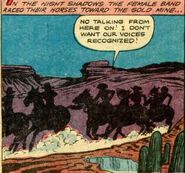 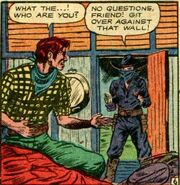 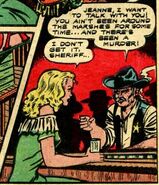 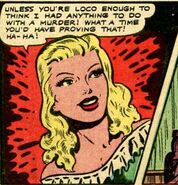 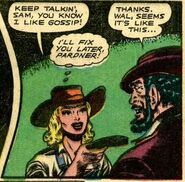 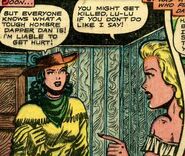 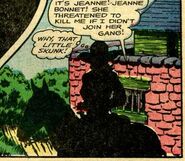 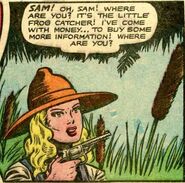 Add a photo to this gallery
Retrieved from "https://femalevillains.fandom.com/wiki/Jeanne_Bonnet_(The_Lone_Rider)?oldid=156219"
Community content is available under CC-BY-SA unless otherwise noted.