Start a Wiki
watch 01:48
The Loop (TV)
Do you like this video?
Jean (Lorenza Izzo) is the hidden villainess of "New Year's", the eighth and final film of the 2016 horror anthology film Holidays. She was introduced as a lonely woman who agreed to go out on a New Year's Eve date with Reggie, who the film's opening revealed was a serial killer with a penchant for killing a woman on every holiday after she spurned his romantic advances.

While the date began awkwardly, Jean and Reggie began appearing to bond over their shared failed experiences in romance, culminatinng in Jean inviting Reggie back to her apartment to watch the Times Square ball drop. Once there, Jean surprised Reggie by aggressively grabbing his crotch, despite her earlier claims that she didn't like dates who were simply wanting sex from her. As Reggie excused himself to the bathroom, Jean turned off the lights and began undressing as Reggie began looking through Jean's bathroom sundries.

It was when Reggie looked inside Jean's medicine cabinet that Jean's status as a serial killer herself was revealed, as there were jars containing various human limbs and organs labelled with names. An empty jar with Reggie's name on it caused Reggie to realize Jean was planning to kill him as well, causing him to accidentally spill the chloroform he was planning to use on Jean into the sink. Reggie also discovered severed limbs and a bloodied corpse in Jean's bathtub before the deranged villainess burst into the bathroom, now dressed in a an all-white outfit and wielding an axe. Reggie fought back against Jean's attacks and tried to flee, only for Jean to stop him by cutting his foot off with  her axe.

After finding the front door locked, Reggie retrieved the gun he had in his coat pocket while Jean followed him while speaking in Spanish. After another fight between the two killers, Reggie attempted to shoot Jean with his gun, only to find that he hadn't loaded it before Jean killed him by splitting his head open. As it became midnight and the Times Square celebration announced the new year, the evil Jean wished the deceased Reggie (in Spanish) a happy new year before pulling the axe from his head, with the film ending with the psychotic villainess dancing with her murder weapon. 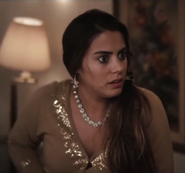 Jean's crazed grin after killing Reggie
Add a photo to this gallery
Retrieved from "https://femalevillains.fandom.com/wiki/Jean_(Holidays)?oldid=201314"
Community content is available under CC-BY-SA unless otherwise noted.