Janira is the sole teacher of a small summer school for girls in Cornwall, England. When newcomer student Fanny Ambler arrives, the teacher realizes that the girl may be able to help her achieve a dark and hidden personal goal. Janira indirectly ensures that Fanny becomes acquainted and romantically involved with the school gardener, Ted, and even secretly slips a potion into their food which causes their inhibitions to weaken. She then further makes sure that they discover an old dungeon located deep below the school, which happens to contain an old text about a witch named Janira who lived centuries ago.

Fanny and Ted become increasingly fascinated with the grisly horrors told within the book, to the point where they decide to torture and murder one of the girls at the school with mutual eagerness. This, too, was part of Janira's scheme and immediately after it occurs, the teacher enlists in the help of the two to sacrifice the remaining girls in the school.

The night before the ritual, Janira summons the two devils who she forged a pact with. It is revealed here that she plans to have Fanny and Ted sacrifice the females so that she may inherit the satanic powers of the witch Janira with the only stipulation being that she cannot touch blood herself until it has been competed. The ceremony does indeed take place the next day, however, Fanny betrays Janira by quickly slicing off the breast of one of the captives and hucking it at the teacher's forehead. The blood from the severed anatomy immediately nullifies the pact and Janira dies an agonizing, fiery death.

Janira learns of Fanny's birthdate and realizes that she is "the one".

...so that the two may discover her hidden lair. 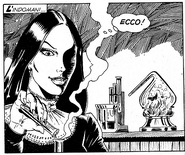 A little concoction for added insurance.

Checking in with the "bosses" one last time.

An evil plan ends in failure, as does Janira herself.
Add a photo to this gallery
Retrieved from "https://femalevillains.fandom.com/wiki/Janira_(Oltretomba)?oldid=183575"
Community content is available under CC-BY-SA unless otherwise noted.